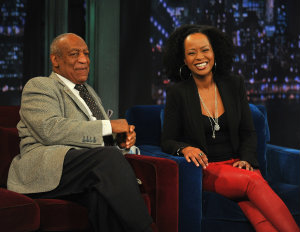 Bill Cosby and Tempestt Bledsoe, who played the role of Vanessa on the ‘90s sitcom The Cosby Show, recently reunited on Late Night with Jimmy Fallon last Friday night (January 4). Fallon said it was a complete coincidence the former co-stars were booked to visit the show in the same night, reports the Huffington Post.

Cosby and Bledsoe sat on the famed late night couch and reminisced on their time as TV dad and TV daughter while watching clips of Tempsett’s new sitcom, Guys with Kids. The show’s snippets featured scenes talking about sex, so the late night host just had to ask, “Is it fun to watch your TV daughter grow up?â€ Cosby quickly replied, “No!â€ He continued, “When she turns out to be stunning, then you have problems.â€

As the TV family members talked about their relationship on and off camera, the ’90s child star told fans she can Cosby get together often, but was quickly interrupted by everyone’s favorite dad who told her not to lie, and said, “Sometimes my checks are late and that’s when I see Tempestt.”

While Cosby and Bledsoe were the only two on the set of Jimmy Fallon Friday night, much of the cast is still in showbiz. Phylicia RashÄd, who played Clair Huckstable, is set to star on the new NBC series, Do No Harm; Malcolm Jamal-Warner, who played Tempestt’s brother, Theo Huckstable, currently stars on BET’s Reed Between the Lines alongside Tracy Ellis Ross; and Keshia Knight Pulliam, who everyone remembers as the adorable Rudy Huckstable, has starred in her share of films, and recently concluded her five-year stint on Tyler Perry’s House of Payne, which aired on TBS.

Catch Tempestt Bledsoe and Bill Cosby on the set of Late Night with Jimmy Fallon below.