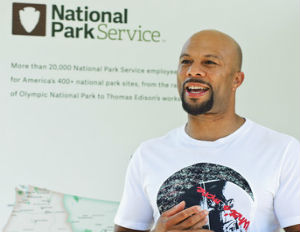 Oscar and Grammy winning artist Common in his hometown of Chicago, IL, serving as Honorary Grand Marshal for the Park Exchange event, part of the #FindYourPark movement in celebration of the centennial anniversary of the National Park Service. (Getty Images)

Common is an American hip hop recording artist, actor, writer, and film producer born in Chicago, Illinois. He gained notable mainstream success through his work in the 90’s. In 2011, he launched Think Common Entertainment, his own record label imprint. In 2015, Common earned an Academy Award for Best Original Song for his work on “Glory,” the title track from Selma,Â co-written with John Legend.