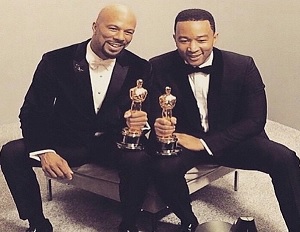 Shortly after the 2015 Oscar nominations were announced, the hashtag #OscarsSoWhite started trending on Twitter as the awards show was heavily criticized for its continued lack of minority inclusion. With the year’s highly anticipated film Selma scoring just two nominations, Common and John Legend’s win last night for best original song became a celebrated moment for all.

After using their Oscars platform to deliver a tear-jerking performance of Glory, the two musical greats graced the stage again for a moving acceptance speech that left audience members and at-home viewers reflecting on the civil rights issues we still face today.

Connecting the civil rights movement with the current issues taking place in France and Hong Kong, Common used the bridge that Martin Luther King, Jr. and other leaders marched on in 1965 as a signal of hope for today.

“The spirit of this bridge connects the kid from the South Side of Chicago, dreaming of a better life, to those in France standing up for their freedom of expression, to those in Hong Kong, protesting for democracy,” said Common. “This bridge was built on hope, welded with compassion and elevated with love for all human beings.”

Following Common’s words, Legend then took the mic to dig deeper into our fight for justice today.

“We wrote this song for a film that was based on events that were 50 years ago, but we say Selma is now, because the struggle for justice is right now,” said Legend. “We know that the voting rights, the act that they fought for 50 years ago is being compromised right nowÂ  in this country today. We know that right now the struggle for freedom and justice is real. We live in the most incarcerated country in the world. There are more black men under correctional control today than were under slavery in 1850.”

While Selma may have came up short in nominations for the night, Common and Legend’s moving speech that brought to the forefront the imprisonment of black men, voting rights and so much more, signified a lasting win that went beyond an Oscar award.

Watch Common and Legend’s powerful speech in full below: