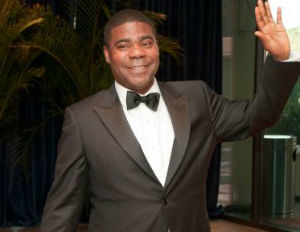 Yesterday, for the first time since the accident that claimed the life of his friend and mentor James McNair, Tracy Morgan spoke publicly about the incident with Matt Lauer.

According to reports, the accident occurred last June while comedians Morgan, McNair, and Ardie Fuqua, along with Morgan’s assistant, Jeff Millea, were returning home from a show. While riding along the New Jersey Turnpike, the luxury van transporting them was struck from behind by a Walmart tractor-trailer. McNair suffered fatal injuries while Morgan suffered a broken leg, several broken ribs and severe brain trauma, and fell into a coma. Fuqua and Millea were seriously injured as well.

Last week, it was reported that Walmart reached an “amicable settlementâ€ in a lawsuit filed by Morgan and on behalf of Fuqua and Millea, however the terms were not released. In a statement following the settlement, Morgan said, “Walmart took full responsibility for the accident, which we greatly appreciate. [Walmart] did right by me and my family, and by my associates and their families.â€ Â Earlier this year, the New York Times reported that Walmart reached a $10 million settlement with the McNair family. His two children were the beneficiaries of the settlement and reports state that “Jamel McNair, 26, and Denita McNair, 19 are putting part of the settlement toward annuities that will pay them ever-increasing monthly sums, starting at $3,000, for the rest of their lives.â€

Sitting with his lawyer during the interview, Morgan said, “The case is settled but the pain is always going to be there for Jimmy Mac … Bones heal, but the loss of my friend will never heal.”

Best known for his work on the network comedy television shows Saturday Night Live and 30 Rock, Morgan was working on a series with FXX, FX’s offshoot network, at the time of the accident. According to a report, the network put the series on hold following the crash.

While recovering from his injuries, Morgan was forced to miss the 40th anniversary of Saturday Night Live. Of his absence, costar Tina Fey said, “I wish my friend Tracy Morgan was here tonight. … I know he was hoping he would be well enough to be here.â€ She added, “If he were here tonight, I’m sure he would remind us that, more than anything, he would like to get us all pregnant.â€

Regarding his return to comedy, Morgan said to Lauer, “I love comedy. I’ll never stop loving her. I love comedy and I can’t wait to get back to her. But right now, my goal is just to heal and get better, because I’m not 100% yet. I’m not,” he said. “And when I’m there, you’ll know it. I’ll get back to making you laugh. I promise you.”

It’s been a year. Just wanted to say thank you for all of your love and support. Will see you soon.