Color of Change Goes After Bravo Over RHOA Nasty Brawl 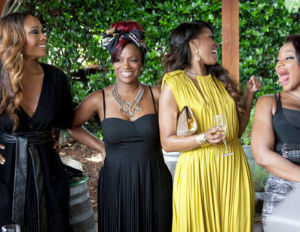 The nasty brawl between Real Housewives of Atlanta star’s Porsha Williams and Kenya Moore during the reunion episode of the popular Bravo show made headlines. People also took to Twitter to voice their opinions.

Now, the civil rights group ColorofChange.org is going after Bravo, condemning the network and executives like producer Andy Cohen for their continued reliance on violent stereotypical images of African Americans. The group is accusing Bravo of staging and profiting from a hostile environment on RHOA, which premiered in 2008, the third show created among the Real Housewives franchise.

“After weeks of promoting the RHOA reunion altercation executive producer Andy Cohen finally condemned the violent behavior of cast members, completely ignoring the staged hostile environment that provoked the altercation and the troubling pattern of violent, stereotypical portrayals of black people across many of Bravo’s black reality franchises,â€ ColorofChange released in a statement reported by the Hollywood Reporter.

“Research shows that dehumanizing portrayals of black people on television lead to real-world consequences for black folks – influencing how we are treated by doctors, judges, teachers and lawmakers. No matter how entertaining, this should be the last fight between black women that Bravo profits from,â€ the group added.

The fighting is an inevitable result of Bravo’s business model and has become a disturbing trend that extends beyond the RHOA cast across most of Bravo’s black ‘reality’ television franchises, ColorofChange told E! News.

ColorofChange and other industry observers are wondering if the blowup wasn’t bound to happen given the ongoing feud between the two throughout the season. On top of that, Moore had a scepter and megaphone prop during the taping which only heightened matters.

E! News reports that Bravo producer Cohen,Â  who hosted the reunion show, was totally surprised. “Call me crazy guys but I didn’t see that coming,” he wrote on Twitter after the epic fight aired. “I hear y’all about the props but at the time I didnt see that result coming”

And when one Twitter user questioned his remarks, writing, “@Andy Why didn’t you see it coming? Stop it,” the host replied, “the idea of two women are going to get physical isn’t top of mind for me. Sorry. If I saw it coming I would’ve stopped it sooner.”

As a result of the physical altercation, Williams was charged with battery, while Moore has threatened to quit the show if Williams returns. A source close to the show also told E! News it’s “highly doubtful” Kenya and Porsha will both return, but the network has yet to decide who will stay or who will go. Bravo didn’t comment.

According to The Hollywood Reporter, ColorofChange would like to see the network adopt a no excessive violence policy, similar to the strategy VH1 implemented for Basketball Wives in 2012.

The group does not want the RHOA cancelled, but just wants some changes to portray positive images of African-American women and families.

Contracts to Purchase Homes are on the Rise