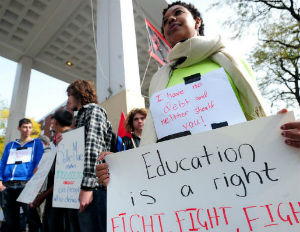 Recent graduates are saddled with 5 percent more student loan debt than prior graduates, according to a recent report issued by the Institute for College Access and Success.

Two-thirds of the 2011 graduating class finished school with debt and an average $26,000 in debt.

Those graduates are facing an 8.8 percent unemployment rate, but analysts are saying that college is still the best bet to secure employment and a decent wage. The report notes that unemployment for those who only have a high school diploma is a staggering 19.1 percent.

The report comes at a critical time. This election season has been heavily focused on jobs and both candidates have been vague about details regarding their plans to help students and graduates mired in loan debt. Estimates put the current student loan tally at nearly $1 trillion.