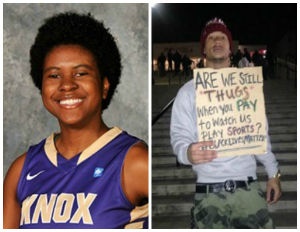 On Saturday, Nov. 28, Knox College basketball star Ariyana Smith took the floor before her team’s basketball game with her arms raised in a “Hands Up, Don’t Shoot” posture during the singing of the national anthem. Walking toward the American flag with her hands still raised in the air, Smith fell to the ground and lay there for a full 4.5 minutes to symbolize the 4.5 hours that Michael Brown’s body lay in the streets of Ferguson, Missouri. Her coach immediately suspended her indefinitely; Knox College later reversed the punishment, stating that the decision was representative of the coach and not the school.

“I could not go into that gym and pretend that everything was OK,” said Smith, whose college game against Fontbonne University was in Clayton, Missouri, the same city where the grand jury chose not to indict officer Darren Wilson. “I could not play in good conscience. I could not play that game.”

Yesterday student protesters gathered outside of Xfinity Center at the University of Maryland, College Park, where the school’s basketball team played against the University of Virginia. Protesters expressed their outrage over a grand jury’s decision to not indict the New York police officer responsible for the choking death of Eric Garner. Joining the group of student leaders was University of Maryland wide receiver Deon Long, who held up a sign that read, “Are we still ‘thugs’ when you pay to watch us play sports? #BlackLivesMatter.”

An image of Long holding the sign immediately caught the attention of social media. Many people circulated the picture to spark debate about the value placed on black athletes.

With all the buzz about athletes at both the college and professional level expressing their outrage over the Michael Brown and Eric Garner cases, what are your thoughts regarding Long’s question? Sound off in the comments section below.