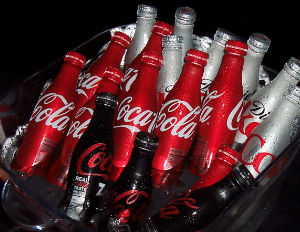 Coca-Cola is recruiting established entrepreneurs to the Coke side of life.Since 2013, the beverage giant has been scooping up “co-foundersâ€ for the Coca-Cola Founders Program and investing in their “intrepreneurialâ€ projects.

[Related: 3 Ways to Stand Out in a Saturated Market]

“First, we partner with experienced entrepreneurs around the world. Then we immerse them in the power of Coca-Cola–our relationships, resources, and reach–before they create a startup. Together we focus on big problems lots of people have. Using lean startup methods, they grow the startup with Coca-Cola as the lead backer. Once the business model is proven, Coca-Cola becomes a minority shareholder. We collaborate from the very start to create more speed, more scale, and more impact,â€ the program’s website says.

To be clear, the entrepreneurs–who must have previous success launching startups–are sought out by Coke, not through some application process. And the entities are not going through some form of tech accelerator. Instead, they are being granted access to the way Coke runs business and are able to pick projects they think will make the brand grow.

But, as Business Insider points out, the endeavor helps the company embrace some of the disruptive techniques that have shaken up other industries. With Coke’s 700,000-plus network of employees and contractors working on shipment, bottling, stocking, staffing, sales and marketing initiatives in about 200 countries around the world, there’s likely room for improvement and innovation. Coke also gets a 20% stake in whatever develops from the co-founders’ participation, which are theoretically products that can be spun off into the general business world.

So far, 11 different startups–two with female co-founders–are a part of the Coca-Cola Founders Program, its site says. Their creations include on-demand staffing, a video search service, a real-time activity finder and an analytics developer. Those ideas came from co-founders based around the world, including in Buenos Aires, London, Tel Aviv, China and San Francisco.