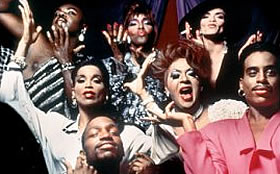 The legendary LGBT film “Paris is Burning,” which won the Grand Jury Prize at the 1991 Sundance Film Festival, has been digitally restored and will make an appearance at the 2015 Sundance Film Festival. It has been more than 20 years since the documentary made by then New York University student Jennie Livingston debuted at the renowned festival.

“Paris is Burningâ€ looks at one group of gay and transgender New Yorkers, struggling to overcome racism, poverty, and homophobia. The film depicts Harlem’s subculture “housesâ€ that serve as intentional families, social groups, and performance teams. Livingston’s iconic documentary offers an intimate portrait of New York’s black and Latino drag balls of the 1980s, where rival houses–in the fashion band sense (i.e., House of Ninja)–compete for trophies and cash prizes in categories like “face,â€ “femme queen realnessâ€ and “voguing.” In fact, Paris is Burning brought the history of “voguing” to a wider audience, and in the process, helped humanize members of society viewed as outcast, according to the film’s critics.

The film also helped earn a legendary status for the late dancer and choreographer Willi Ninja. A gay man, Ninji was known as the godfather of ‘voguing and was featured prominently in the film. He parlayed his movie appearance into performances with a number of dance troupes and choreography gigs. His style served as an inspiration to Madonna who immortalized it in her 1990 hit song and music video “Vogue.â€

“Paris Is Burningâ€ has been added to the Sundance Collection at UCLA, which was established in 1987, and is dedicated to preserving “independent documentaries, narratives and short films supported by Sundance Institute.” Now that Paris is Burningis part of this collection, its negatives and other elements will be archived and preserved at the Institute.

According to a press release for the Sundance Institute, the screening of “Paris Is Burningâ€ at the film festival will feature a DCP of the new digital restoration of the film created from original 16mm elements. This recent effort restores the feature to the original uncropped aspect ratio. The project represents the collaborative efforts of the Sundance Institute, the Outfest UCLA Legacy Project, and UCLA Film & Television Archive, with permission of Miramax.

Ava DuVernay Shines Through the Life of Dr. Martin Luther King with Selma