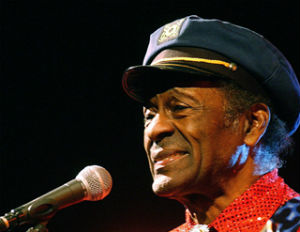 Three men were arrested for allegedly stealing an electric guitar and other possessions from the home of Rock ‘n’ Roll legend Chuck Berry in St. Louis. Among the items were power washes, car batteries and part of a fence.

Officials are not sure when the items were stolen or if they were taken at the same time. Berry, 85, still performs some of his music hits in a club in suburban St. Louis.