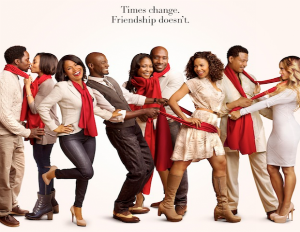 In the midst of shopping for gifts, attending holiday parties and indulging in comfort food, the holidays are a perfect time to settle in with family and friends and enjoy Christmas movies. So, to help you get started we’re taking a look at the Christmas movies that have earned the most and the least at the box office.

The Best Man Holiday (2013) – a pre-Thanksgiving movie focused on college friends reunite after 15 years over the Christmas holidays, took in more than $30 million its opening weekend and has grossed an impressive $67.6 million worldwide. “Holiday,â€ written and directed by Malcom D. Lee, cost just $17 million to produced. Universal. It also far outpaced the original movie, which opened to $9 million and topped out at $34 million.

Black Nativity (2013) — A $17.5 million film featuring mega stars such as Angela Bassett, Forest Whitaker and Jennifer Hudson, didn’t do well at the box office, only making $3,669,530 opening weekend. The film is about a teen from Baltimore who has been raised by a single mother travels to New York City to spend the Christmas holiday with his estranged relatives and discovers the true meaning of faith, healing, and family.

Tyler Perry A Madea Christmas (2013) — debuted at $16M at the box office, significantly low compared to his other box office hits. The film follows Madea on one of her unique but comical adventures as she’s persuaded into helping a friend pay her daughter a surprise visit in the country for Christmas.

This Christmas (2007) A comedy-drama family film, featuring Chris Brown, earned over $17 million during the opening weekend and Â grossed nearly $50 million. The film written, produced and directed by Preston A. Whitmore II, was shot on a relatively slim $13-million budget. The storyline is centered on the Whitfield family’s first holiday together in four years.

Last Holiday (2006) – A comedy starring Queen Latifah, earned $15,508,779 during opening weekend. The film is centered on a shy woman who decided to take a European vacation, after she she’s diagnosed with a terminal illness.

Trading Places (1983) – A comedy starring Eddie Murphy, earned over 7 million during opening weekend but grossed nearly $90M. The storyline focuses on an homeless street hustler and upper class broker whose lives cross paths when they are unknowingly made part of an elaborate bet.