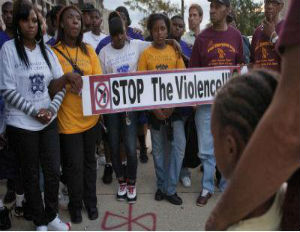 Though it’s only October, Chicago has surpassed last year’s murder count with less than 2 months left in the year.

The 436th homicide victim of the year was a man in his 30s who was shot on Monday.

Chicago’s homicide count has garnered national attention and the town now has a nickname –”Chiraq” – an allusion to the war-torn country of Iraq.

President Barack Obama mentioned the violence in an MTV interview on Friday.

“I live on the South Side of Chicago,â€ said Obama. “Some of these murders are happening just a few blocks from where I live. I have friends whose family members have been killed.