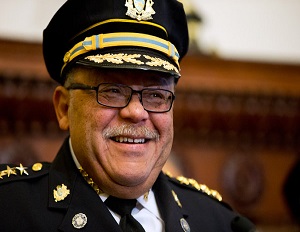 In an effort to restore its trust with the public following the release of the Laquan McDonald shooting video, Chicago has hired recently retired Philadelphia police commissioner Charles Ramsey to help reform its police department.

Mayor Rahm Emanuel’s office announced Sunday that Ramsey has been tapped as a consultant to their police department, which is now under civil rights investigation by the Department of Justice. His hiring comes amid allegations that Emanuel and his team tried to cover up the video that showed veteran police officer Jason Van Dyke shooting 17-year-old McDonald 16 times.

[RELATED: Laquan McDonald and What My Dying Father Told Me About the Chicago Police]

“The situation in Chicago is not unlike many cities across the country, but the people of Chicago should know that their leaders are working hard to restore trust where it has been lost,” The New York Times reports Ramsey saying in a statement.

Ramsey, 65, is a native of Chicago and got his career start as a cadet for the Chicago Police Department in 1968. Spending 30 years with the CPD, Ramsey played a major role in establishing effective community policing in the city before leaving in 1998 to become chief in Washington, D.C. Since leaving Chicago, Ramsey has applied to be police superintendent a number of times, including in 2011 when Emanuel passed him over for Gary F. McCarthy. Last month, McCarthy retired from his position after receiving backlash for the police department’s lack of response to the McDonald situation.

After Washington, D.C., Ramsey served as police commissioner for Philadelphia, where he instituted a policy that publicly identifies police officers involved in a shooting within 72 hours. After reviewing the footage of McDonald’s shooting, Ramsey called Chicago’s withholding of the video “almost more controversial than the shooting itself.” In addition to having co-chaired President Obama’s 21st Century Policing Task Force, Ramsey has been quotedÂ asÂ saying that the Black Lives Matter movement has the potential to be “the most significant civil rights movement since the ’60s.”

While Ramsey retired earlier this month from his position as Philadelphia’s police commissioner, he has said that he is no longer interested in serving as Chicago’s superintendent. In his role as a consultant for the city’s police force, Ramsey will help in strengthening the relationship between local police and the communities they serve.

Marketing and Branding Tips For Freelancers