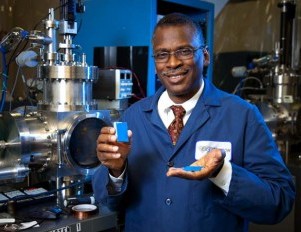 With a mind toward energy independence, President Barack Obama’s administration has made it a priority to put 1 million electric cars on the road in the next four years. Atlanta-based scientist Lonnie G. Johnson has been working toward that goal for nearly 20 years. In fact, he was trying to construct a device to produce alternative sources of energy when he unexpectedly invented the Super Soaker water gun in 1989.
But Johnson, a former NASA scientist with a bachelor’s degree in mechanical engineering and a master’s degree in nuclear engineering, hopes his legacy will stand for something far more important than a children’s toy. He has put much of the money he made from the Super Soaker into two projects: the lithium air battery and the JTEC (Johnson Thermo-Electrochemical Converter) system.

The lithium air battery reacts to oxygen from its surroundings instead of reacting to corrosive metal materials that are stored inside traditional batteries. It is lighter than conventional battery cathode materials and lasts longer since oxygen is an unlimited reactant. Last year Johnson and his team became the first researchers to use a rechargeable lithium air battery to power a device. They started small by powering a remote control car–a suitable choice since the objective is to one day power electric vehicles. Johnson calls the lithium air battery “a game changer,â€ claiming it can power a vehicle for more than 1,000 miles on a single charge. By comparison, the Chevy Volt has a 16-kWh lithium-ion battery that lasts only 40 miles before it switches to its gas engine.

“Lithium air is a very complicated technology. The great challenge for vehicle electrification–of getting people off of petroleum–is getting a battery that is powerful enough, cheap enough, and lightweight enough to rival gasoline in terms of its energy density,â€ says James Greenberger, executive director of the National Alliance of Advanced Technology Batteries. “Lonnie is unquestionably one of the leading scientific minds working on that problem.â€

Johnson’s other endeavor, the JTEC engine, which is still in the development phase, could potentially convert heat from the sun into electricity that is able to power entire cities, says Johnson. Popular Mechanics magazine awarded Johnson with the Breakthrough Award for the JTEC in 2008, and Paul Werbos, a program director at the National Science Foundation, believes that the engine could be worth trillions of dollars one day.

Still, obtaining funding to advance both the JTEC and the lithium air battery has been a challenge. Johnson’s companies have received contracts from the U.S. Department of Defense and the Department of Energy to develop the two technologies, but the support has been insignificant considering the president’s goal toward energy independence, he says. “More emphasis needs to be placed on these particular technologies because they are in a class all by themselves.â€