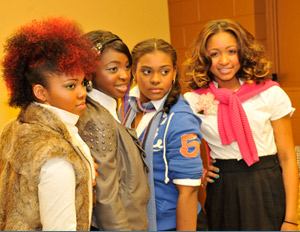 The cast of The Girls Bathroom

It often seems that regardless of how many channels a household pays for, there’s rarely anything good to watch. The writer’s strike of 2007-08 gave way to a rash of cheap-to-produce reality series, making quality scripted programming a rare find–especially when it comes to shows featuring people of color. Industry veterans Darralynn Hutson and Michael Negri took it upon themselves to provide fresh perspectives with their new digital content company, Chapter3.tv, which provided Web-based original and branded programs. Started with just $15,000 of the founders’ own money (along with another initial $50,000 investment from two former classmates), Chapter3.tv soft launched with its first season of shows this past September, targeting to women 18-45 years old.

Despite a combined 44 years of experience, Hutson (formerly of multiple Viacom networks) and Negri (formerly of Sony/BMG Music) both found themselves out of jobs thanks to an uncertain economy. Once thing the pair was certain about was the public’s need for something different. They pooled their resources together and began formulating what would become Chapter3.tv. “I put in $5,000, my partner put in $10,000–that’s how we did our first show, WTF?,â€ recalls Hutson. “[Negri] had a whole bunch of equipment from working with Sony, and we just went to work. I’ve been living off of [Chapter3.tv] ever since I got laid off.â€

One move that helped launch Chapter3.tv so rapidly was working with sponsors to create branded programs also known as “advertaintent,â€ which is the practice of creating programs based on paying companies’ desired target markets. “I found that the larger brands were getting bombarded by [already completed] movies and projects that wanted their brands,â€ says Hutson. “What I felt those companies really wanted was something very authentic and brand specific instead. So that’s how we create content. Our original ideas are specific to what the companies are looking for.â€

Going one step further than the average Web-based content, all Chapter3.tv programs are specifically produced for mobile-device viewing. This makes the shows just as on-the-go as their viewers. This past Labor Day, Chapter3.tv launched The Girls Bathroom, a weekly Web series that follows four Black teenage girls as they hold on to a virtuous pact. Each episode is just five minutes long making it easily accessible to multi-tasking and easily distracted teens. “We’ve worked with 10 to 12 advertisers, and they all say five minutes is enough,â€ Huston explains. “We’re trying to cut stuff down!â€

This unique approach in both platform and length has already set Chapter3.tv apart from the pack. In just a matter of weeks, the company’s Website has already captured a respectable 12,000 hits. In addition to The Girls Bathroom, which has its season finale October 31st at 4pm, the fall lineup includes The Black Women Rock Experience!, a weekly Web series that follows poet Jessica Care Moore as she forms a world tour; TAWTK: The Audience Wants to Know, a live Q&A on the latest movies and TV shows; and the aforementioned WTF?, a short daily look at some of the most ridiculous videos, news and sightings online.

Planning for the future, Huston and Negri have plans to acquire more content and more corporate brand partners. Specifically, they look to partner The Girls Bathroom with a media acquisitions company. “It sounds so clichÃ©, but I really study companies and know their worth by reading magazines like Black Enterprise,â€ says Huston. “You have to know where the money is, and know how to ask for it. Watch, in six months I’ll be able to say I signed with some major corporations.â€ We’ll just have to wait and see.