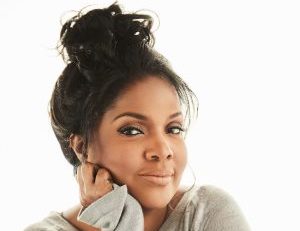 It’s been nine years since Grammy Award-winning gospel legend CeCe Winans’ last full-length album, (Thy Kingdom Come,) but it’s technically been 19 years since she recorded a set of songs (Everlasting Love) as ambitious and unexpected as her new project, Let Them Fall in Love (PureSprings/Thirty Tigers).

If Phil Spector experienced a jailhouse conversion and was on parole, this is just the type of masterpiece he’d produce for gospel music’s golden girl. The public first met Winans as half of the BeBe & CeCe sibling duo that stormed the R&B charts with platinum-selling, spiritualized love songs in the late 1980s. Then, in the late 1990s, Winans continued her hit streak as a solo act and found even wider success with her primetime television appearances and collaborations with Whitney Houston.

The 10 songs that comprise Let Them Fall in Love pick-up where Winans’ Everlasting Love album left off in 1998. That set paired her with then-nouveau producers such as Lauryn Hill, Tony Rich, and Tommy Sims who delivered a solid, urban inspirational album. This time, the young upstart producer is Winans’ 32-year-old son, Alvin Love III, who wrote or co-wrote the majority of the album while supervising production with help from Sims on four of the tracks.

Four years ago, Love went to his mother with a vision. Winans had been planning to record a hymns album but Love had other ideas. He wanted to create a retro but relevant project. “I fought him tooth and nail on most of it,â€ Winans recently said with a chuckle on The Yolanda Adams Morning Show radio program. “But I love this record…It’s very different. It’s something I never would have thought of for myself.â€Â In keeping with the flashback theme, the artwork is reminiscent of 1960s LP covers and there’s also a vinyl edition of the album.

This collection can be divided into four distinct styles of yesteryear. The first is Phil Spector’s Wall of Sound that was perfected on iconic songs such as Tina Turner’s 1966 “River Deep, Mountain High.â€ This isn’t the bubblegum soul Motown’s Berry Gordy cultivated. No, musically, this is closer to Spector’s street-wise treatment of The Ronettes on “Be My Baby.â€ It’s on full display on “Run to Himâ€ and the autobiographical, “He’s Never Failed Me Yet.â€ Â The horn-driven “Hey Devil!â€ pays homage to Ray Charles’ “What I’d Sayâ€ and it features vocals by Winans’ former Detroit neighbors, the Clark Sisters.

The next stylistic dimension is the Pop-Folk, singer-songwriter genre that was popularized by James Taylor, Joni Mitchell, and Kris Kristofferson in the early 1970s.Â Winans brings a full-throated, belting vocal to Kristofferson’s 1973 No. 1 Country hit, “Why Me, Lord.â€ The mellow “Peace of Godâ€ is carved in the acoustic—soul style of Carole King’s “It’s Too Lateâ€ but with more sophisticated flourishes. “Lowlyâ€ could have been pulled from The Staple Singers’ late `60s repertoire with its Hippy Rock groove, shimmering tambourines, and instructional message to humanity–only thing missing is Pop Staples on the guitar.

Winans then gives us a jolt of what a Sunday morning church service might have been like in the late 1970s when Walter & Tramaine Hawkins and Andrae Crouch ruled the gospel airwaves. We can hear their impact on Winans in these “churchier” songs like the pulsating remake of her late brother Ron Winans’ 1989 Friends & Family Choir track “Dancing in the Spiritâ€ (featuring Hezekiah Walker’s Love Fellowship Choir). Fans of The Late Show with David LettermanÂ may recall that the leader of the comedian’s show choir, Lady Peachena, wrote the track and performed it on the program throughout its 23-year history.

The organ-based ballad, “Marvelous,â€ is all that its title indicates. Backed by a thick, traditional-styled choir, Winans sings this simple statement about God’s goodness with a deliberate simplicity that makes it all the more powerful and resolute. With just under 45 minutes running time, the songs don’t linger. They are quick and catchy. This is arguably Winans’ most cohesive and well-conceived set since Throne Room in 2003. Her rich alto still packs a vocal punch and her high notes are sure and steady.Â It’s a thoroughly enjoyable peek into her heart, soul, and calling.

“Alvin was hard on me in the studio,” Winans recalls. “He’d really work me during the songs, and I knew that was a good thing because it meant he was pressing me to get the best performances possible. Now I listen back and I know he was right. It was so important to get the right interpretation of each song.”

Finally, Winans doesn’t neglect fans of her classics “Alabaster Boxâ€ and “He’s Always There.â€ For them, she offers the lush, beautifully orchestrated ballads, “Never Have To Be Aloneâ€ and the title song. “That was the first song for this album and I knew right away that I wanted the record to be named ‘Let Them Fall In Love,'” she explains. “I told my son that it had to be the heartbeat of the album. There’s a lot of different styles and a lot of strong messages on there, but all of them are to bring us to this point. It’s why I came back and recorded another album, to express my heart and my desire that people, young and old, can listen and fall in love with the higher power, fall in love with love, and fall in love with faith and joy and peace.â€

Inequality in Tech May be Worse Than We Thought