In Case You Missed It: Weekend Political Must Reads 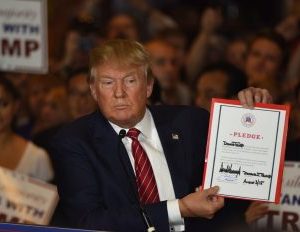 By no surprise, the first week of Donald Trump’s presidency was jammed packed with controversy,Â confrontational news stories, executive orders, and protests. In just seven days, the Trump administration has managed to launch a war against the press, science, immigrants, and even reality, which they have branded as “alternative facts.” As a result, Trump has succeeded in doing what he does best, and that’s keeping our eyes fixated on him to the point that it now feels like we’ve been sucked into aÂ horrible reality TV show that never has a dull moment.

Nevertheless, just in case you got lost in the whirlwind ofÂ Keeping Up With Trump, you may have missed some of the great political content published on BlackEnterprise.com this week and around the web. Here’s a roundup. Many Twitter users engage in mercilessly mocking of Trump. Here are 10 of the best of the bunch (in no particular order). Click here to read more.

Donald Trump may not have been the choice of black America. Nonetheless, here’s how we can thrive in the environment created by his administration. Click here to read more.

You wouldn’t call a firefighter to fix a flat tire, so why would Trump reach out to a comedian or rapper to address racial issues?

After meeting with Trump, Steve Harvey, Kanye West, and Jim Brown walked away with a photo opp and absolutely nothing accomplished for the black community.

This week in Trump’s America: WeekÂ 1

As difficultÂ as it may have been, ThinkProgress has managed to document and concisely summarize every single action, order, and lie told by the Trump administration in the past week. Click here to read more.

Yes, you can and should pay attention. But don’t feed the trolls or his ego with quantifiable attention.

Instead of feeling hopeless and depressed, there are a number of actions that we can take to help us cope and survive under the Trump administration.Â Click here to read more.

Required Reading — What Do Books Say About Us?