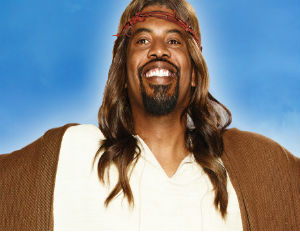 Adult Swim describes the series as, “Jesus living in present day Compton, California on a daily mission to spread love and kindness throughout the neighborhood with the help of his small but loyal group of downtrodden followers.”

This “Jesus,” however, uses drugs, profanity, and gestures inappropriately and some Christian groups who say the show “completely misrepresents Jesus” are not amused.

The jury is still out on whether this guy really thinks he is Jesus, or whether he may really be Jesus, but he goes around Compton with a bunch of ragged followers who look like they’ve had one too many forties and have smoked way too much pot.

The show is created by Aaron McGruder, the mind behind the popular “Boondocks.” McGruder also executive produces.

The Cartoon Network series is obviously meant to be a satire, but critics who’ve seen the trailer aren’t laughing. At least one Christian group is already lobbying the network to cancel the show, saying its contents is blasphemous. Others say it is crude, offensive, and sacrilegious.

At the core of their argument, is their belief that Adult Swim had a more sinister motive behind the series. They set out to mock Christianity.

The conservative Christian group American Family Association, says, “Adult Swim is not ridiculing any other religion and wouldn’t dream of mocking Mohammed or Muslims, but has no problem denigrating Christians.”

Other critics agree saying people feel it is okay to mock Christianity and Jesus, but not Mohammed and that’s because they fear retaliation from Islamic fundamentalist groups.

Right now there is an ongoing open call to boycott the network and its advertisers.

What do you think? Leave your comments below.

3 Steps to Success for Young Bosses