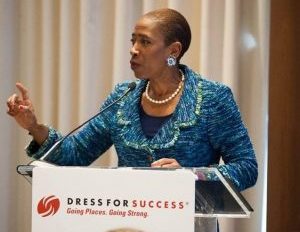 CarlaÂ HarrisÂ has made a name for herself as a leading Wall Street banker, renowned gospel singer, andÂ highly sought-after motivational speaker. Throughout her career, she’s amassed a wealth of experience in several industries, includingÂ technology, media, andÂ telecommunications. She currently works asÂ the vice chairman at Morgan Stanley where sheÂ is responsible for increasing client connectivity and penetration to enhance revenue at the multibillion-dollar firm. On top of that, President Barack Obama appointed her to chair the National Women’s Business CouncilÂ in 2013.

Yet, like the rest of us, Harris has faced setbacks and obstaclesÂ along her remarkable journey. However, she’s managed to transform her experiences along with her business expertise and success secrets into strategic career advice that she likes to callÂ “pearls.â€

HarrisÂ shared some of her precious pearls during theÂ keynote address at the 2016 Dress For Success power breakfast, titled Women In Business: Making Change. Speaking on the topics of career advancement, power, and perception, HarrisÂ dropped several helpful gems that empoweredÂ a room full of women like myself.

Here are a few of Harris’s pearls:

On Challenges: It’s Not About You

According to Harris, some of the challengesÂ we endure are not intended to break us down. Instead,Â once we get through it, we are left with tools and insightÂ that can serveÂ as a source of hope and encouragement forÂ others going through the same situation.

“Sometimes it is happening to you, but it is really not about you,â€ said the Wall Street powerhouse. We go through these experiences so that we can “witness to someone else who is going through that much, much later, and say ‘oh, that happened to me, I got through it. Let me tell you how to do that.’â€

On Power: Give It Away

Many people believe the only way to gainÂ power is by stepping on others and seizing it by any means. On the contrary,Â Harris says the easiest way to grow your power is by giving it away.

“Every time you give away some of your power, your power is then multiplied, and you become even more powerful,â€ said the executive.

“Even when you’re thinking you have nothing to give, you have some intellect, some experience, some access to a relationship that will empower somebody else, and therefore you will be empowered.â€

She added, “you may not feel it right then, but trust me, it’s going to come back in a very powerful way when you least expected it.â€

On Your Image: Perception Shapes Reality

Harris pointed out that most decisions concerning your workplace advancement are made by managersÂ when you’re not in the room. However, despite how smart or capable you are, others will only recommend or endorse you for a promotion if they are aware of your strengths. On the other hand, if people don’t know how talented you are or think you’re incompetent, then it isÂ less likely that they will vouch for you.

Fortunately, Harris says there is a way to shape your perception.

Well, you can craftÂ the lens in which people see you by embracing theÂ qualities that you want people to associate with you. Then reinforce to others that you possess theseÂ strengths in the way that you talk about yourself and present yourself. Eventually, others will believe you have these characteristicsÂ if you continue to demonstrate and sayÂ that you do.

On Maximizing Success: Figure Out What It Looks Like

In order to achieve success atÂ your current job, in your career, or on a project, you must first determine what qualities and actions are needed to be successful. “Never assume you know what success looks like,â€ she said. Instead, she suggests that you have conversations with your boss to find out how they define success in your role. Then, once you know what they’re expecting, you canÂ devise a plan to meet and exceed their expectations.

“If you know what you’re playing for, it will keep you motivated and inspired to deliver excellence every day.â€

Learn more about Harris’ pearls in her bookÂ Expect to Win.

Reality or Illusion: Will You Have Enough Money to Retire?

Financial Violence: 4 Signs to Watch for in a New Relationship