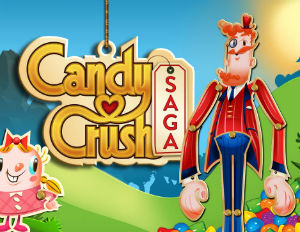 If you happen to live anywhere with public transit and cellphone coverage, chances are you’ve seen someone hunched over their smartphone playing King’s Candy Crush Saga game. The company is banking on that trend with its initial public offering. The mobile game company wants to raise $500 million.

King’s five most popular games all bear the “Saga” namesake, though Candy Crush Saga is its top earner with over 93 million daily active users and over 1 billion games played per day. It’s a killer app compared to its siblings like Pet Rescue Saga and Bubble Witch Saga, the latter of which averages only 3 million active users per day.

King’s latest quarterly report showed a $269 million profit, a definite improvement from the $81 million profit from the beginning of the year. One interesting datapoint, noted by Business Insider, is the dip in profits from Q3 to Q4 of 2013, potentially indicating a trend in diminishing returns from the immensely popular social game.

In short, if King doesn’t release another killer app when Candy Crush Saga disappears, the outcome won’t be pretty.

King wouldn’t be the first free-to-play company trying to cash in on its 15 minutes of fame. Zynga’s IPO was the talk of the town when it filed for IPO in 2011 at $10 per share. It’s currently trading at around $5 per share, a 52-week high. You can check out King’s SEC filing here.