You Can Learn to Code – Without Taking on Debt

Over the summer it seemed that every other week media reports announced that one coding school after another was closing.

Coding academies—often called boot camps—have taken the world by storm over the past six years. Everyone from college grads to dropouts to mid-career professionals was thinking about or actually attending these schools with the hope of on-ramping to a high-salaried position in the tech space. For some, the dream came true.

But it may be that their early success made some schools expand too quickly or too ambitiously. Some of the biggest names in the sector are now closing, while others are becoming more innovative to both serve students better and outlast the competition.

Full disclosure: When my son was between schools, we seriously considered a coding academy. Although he ended up opting to go to college, our family was convinced that a 12-week coding school just might do the trick, although some in the tech space say otherwise.

And it isn’t always easy for students to come up with the $15,000 tuition up front—which is what most coding boot camps require.

Except for those that offer income share agreements—which require little to no cash up front. I’ve written before about a school that costs its students nothing up front, nor do its students take on debt.

“The $15,000 price point is difficult for most people to come up with,” McDonnell told me. “And unlike regionally accredited postsecondary education, these coding boot camps are not eligible for Title IV funding, so you can’t take out a student loan. We were looking for alternative ways that students could finance their education.”

You probably know that Strayer is a for-profit entity. Yet, I’m excited about this program—and that’s saying a lot. I’ve written a bit over the last two-and-a-half years about how disastrous and predatory for-profit schools are—and how they prey mostly on vulnerable people, especially low-income, poorly informed people of color.

Their low graduation rates, high debt burden, and poor value in the job market all work against their recommendation.

But this is a program I think I can get behind. I’m not kidding. My son is a full-time computer science student, but I am going to tell him about this program.

It’s in the best interests of the school to make sure they’re teaching students what they need to be employed—since students must be working in order to pay the schools back—setting up a kind of virtuous circle—instead of the much more familiar vicious cycle of debt —useless degree/drop out—more debt/no job—leaving students worse off than if they’d never gone to school at all.

“The way we try to protect the students,” McDonnell continued, “is if you’re unable to find work, you can get up to two years of deferment. The second protection is, if you’re unable to get a job paying at least $40,000 then effectively the program is free. We do absorb the cost on that.”

Once employed, grads agree to pay 8% of their monthly gross income for 48 months. There are no additional fees or interest charges.

“We do the work of placing students in full-time jobs, which in our experience offer average salaries of $55,000 to $75,000,” says McDonnell, who told me that their placement rate is an attractive 93%. “These coding jobs are very good jobs.”

McDonnell went on. “There’s a problem of economic mobility in this country. Tech jobs are going unfilled. Traditional CS degrees are not equipping students for these jobs. The income share agreement should make this vastly more accessible to students.” 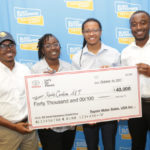 Coming Soon: Your Medication Will be Printed Out Like a Document!