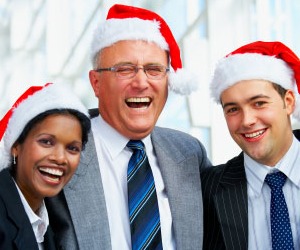 More small-business owners plan to be in the holiday spirit this year and that means more raises and holiday parties, according to a new report by American Express.

The survey of 501 bosses found that on average they plan to give out a 9 percent paycheck boost to workers this year. 35 percent of small business owners with less than 100 employees plan to give bonuses. This is up from 29 percent last year. Four out of 10 supervisors said they’ll throw a holiday party; this number is also up 35 percent from 2011. These parties will not be lavish celebrations as the amount owners plan to spend is down to $959 dollars, as opposed to the $1,029 owners spent in 2011.

Almost half of all owners said they’ll be giving workers time off for the holidays, and more than half plan to give clients and customers gifts. This number is up 43 percent from last year’s holiday season. The budget for these gifts will average out to $958, which is an increase from $827 and $740 for 2011 and 2010 respectively. One third of small business owners last year said they wouldn’t do anything special for the holidays. This year that number is closer to two in 10, perhaps a sign of optimism as the economy shows signs of recovery.

Small business owners do not plan to extend this holiday spirit to customers. Only 19 percent plan to offer discounts or deals to boost holiday sales, which is down 24 percent from last year, while 41 percent of retailers said they would do the same.

Do Talk to Strangers: How You Can Successfully Break the Ice

Tips to Help Your Business Standout on Small Business Saturday