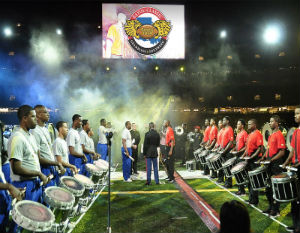 The Bayou Classic is The Powerhouse of Classics

Many fans claim to know about college football, as long as it relates to the Big Ten or Southeastern Conference. There is, however, a brand of football that many of these fans may not know very much about. Historically black colleges and universities have put together football events that have been around for decades. Whether or not you went to an HBCU to study is not the point. The point is that this phenomenon is something that everyone should experience at least one time.

In the immortal words of Willie Davis, “I’d just like to say it’s been more than a game, it’s been a way of life.” The legendary Hall of Fame football great may have been reflecting on his career as a champion in professional football during his memorable speech, but the sentiment could easily apply to the fierce rivalry between his Grambling State University Tigers and the Jaguars of Southern University.

There are many events across the country, but we are here to highlight the greatest rivalry in the game today. That game is the Bayou Classic. When asked to describe the game, Angela L. Young, the Bayou Classic media directorÂ forÂ New Orleans Convention Co. Inc., Â (NOCCI), made the following statement: “The Bayou Classic is the historic gridiron rivalry between Grambling State University and Southern University, encompassing a weeklong series of entertaining and socially enriching events from Nov. 22—26 in New Orleans.â€ The NOCCI has managed the planning of the Bayou Classic for the past six years.

The 42nd Annual Bayou Classic had nearly 63,000 in attendance in 2015, while The Battle of the Bands & Greek Show hosted 29,652 fans. It wasn’t always this way. Early attempts of partnership with the Bowl Committee in the 1950s and 1960s were not supported in New Orleans. Building the game required a clear demonstration of fan supportÂ and a wave of social change.

The History of the Rivalry

According to the Eddie Robinson autobiography, “Never Before, Never Again, the annual Southern vs. Grambling game had so much demand from fans that he knew they could make even more money in a larger venue. “Whenever Southern University came to Grambling to play in what we now call the old stadium, there would be four or five people for every person who got in.â€ He recalled one home game in the early 1970s where “more than 10,000 people just walked over the fence until it collapsed.â€

Coach Robinson proposed to move the game to Shreveport, Louisiana, where the stadium could host more than 40,000 people. The success of that endeavor enabled the teams to move the game to an even larger facility in 1974. Â Seventy-six thousand fans watched the 1974 game between these two schools in Tulane Stadium. This was the origin of the Bayou Classic. Dottie Belletto, president and CEO of NOCCI, had this to say about the historical impact of the Classic: “The Bayou Classic, along with the Sugar Bowl, and the NFL comprised one of the three pillars to enable construction of the Superdome.â€ To this day, the Mercedes-Benz Superdome hosts this event every Thanksgiving weekend. In the opinion of the author, this game has continued to be the most influential contest between HBCUs.

The Classic Truly is More Than a Game

The Bayou Classic has evolved over the years to include much more than the football game itself. The Thanksgiving Parade brings the community together before the game is played and features 13 marching bands, including both universities. The marching bands and dance teams are famous, and they are extremely competitive. They have always found creative ways to generate smiles on both sides of the field. Even if you don’t like football, you will get the full value of your ticket by the end of halftime. The football plays, the band music, the dance routines, the local hospitality, and the New Orleans food are all incredible. In the midst of all of this pageantry, however, there is a serious mission.

The mission of the classic extends far beyond the field of play. Belletto added, “‘I’ve had the opportunity to travel the country and experience other HBCU Classic games. As amazing as it was to see these games, there is nothing like the Bayou Classic. The Bayou Classic offers the perfect combination of education, family values, and entertainment. This mixture has helped us grow year after year and continue our commitment to making a difference in the lives of young people.”

The Economic Impact of The Classic is Significant

For graduates, the activities support “Business networking for alumni and fostering relationships with the universities.” Even if you have no direct tie to either school, you can have fun while contributing to a worthwhile mission. The Bayou Classic is one event that is truly worth the experience.

BE Readers:Â  If you have a favorite classic, please add it to the comments, and show why your favorite classic should be taken into consideration as the greatest of them all.