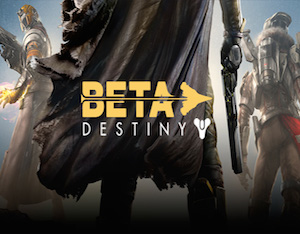 Bungie’sÂ “Destiny” beta was a widely anticipated event. Beginning on July 17 and ending on July 27, players had two weeks to enjoy the title in preparation for its Sept. 9 release.

Published by Activision (NASDAQ: ATVI), the dual companies confirmed that “Destiny’s” beta was played by millions of people—making it the largest played game of the next-gen console era. To date, the “Destiny” beta clocked in 4,638,937 unique players who participated in matches and the single-player story campaign.

“This is the biggest beta of this console generation by a wide margin and the largest console beta ever for a new video game IP to date,” said Eric Hirshberg, CEO of Activision Publishing. “Hosting a beta at this scale is an incredible feat, so we’re thrilled to see the phenomenal response. But the beta is just a taste of what’s to come. We’re counting down the days to our launch day, Sept. 9.”

“Destiny” will launch simultaneously on that day on PlayStation 3, PlayStation 4, Xbox 360, and Xbox One consoles. Players who own a Sony gaming console will experience the science-fiction first-person-shooter’s “exclusive playable content,” and have the opportunity to purchase a PlayStation 4 bundle pack.

“We surpassed even our own goals and the feedback was invaluable,” said Pete Parsons, COO of Bungie. “We cannot thank the community enough, the response was humbling and in the weeks ahead we’ll be working hard to ensure that Destiny lives up to the expectations at launch.”

“Destiny” is rated T for Teen and will be available on Sept. 9.

President Obama To GOP: ‘Stop Hatin’ All The Time’