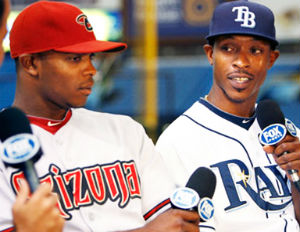 Justin and B.J. Upton will both play in the same outfield as members of the Atlanta Braves.

On this day in 1950,Â Jackie Robinson signed the richest deal in Dodgers history, worth $35,000. His legacy, in many ways, was honored today as it was announced the Atlanta Braves traded for outfielder Justin Upton.

The Braves now have an all-black outfield, comprised of 25-year-old Upton, his brother, B.J., 28, and the exciting Jason Heyward, 23.

B.J. Upton was signed for five years at $75 million dollars; Justin is currently under contract paying him $38.5 million over three years. According to Baseball-Reference.com, Heyward is eligible for arbitration in 2014, and will be a free agent in 2016.

After signing, Robinson was optimistic he could repeat his MVP season in 1949.

“I’m feeling fine and figure to be in my best shape in the last couple of years,” he said in an AP report dated Feb. 4, 1950. “I expect to report to camp weighing about 203 pounds. I want to be ready early this season. I figure to do more running and steal more bases this year. I know I can do the club a more good if I’m in there running and worrying the pitchers.

Twelve years later, on the same day, Robinson became the first African American elected to the Baseball of Fame.

It’s not the first time a team has featured an all-black outfield: the 1983 Oakland A’s hadÂ Rickey Henderson, Dwayne Murphy and Mike Davis. The San Francisco Giants, on its 1951 team featured the first all-black outfield in Major League Baseball history. They were Hank Thompson and Hall of Famers Monte Irvin and Willie Mays.