For anyone who’s ever been stunned into inaction by the world’s seemingly intractable problems and the apparent powerlessness of one individual to effect change, “Half the Sky: Turning Oppression Into Opportunity for Women Worldwide” (Knopf Publishing; $15.95) by husband-and-wife team Nicholas D. Kristof and Sheryl WuDunn is a real antidote. There is even a chapter entitled “What You Can Do,â€ but since that’s chapter 14, I may be getting ahead of myself.

Kristof, a two-time Pulitzer Prize winning op-ed columnist at the New York Times, writes extensively (among other topics) about women’s rights, poverty, and injustice around the world and here at home in a way that points to solutions. He and WuDunn call the oppression of women and girls in the developing world the human rights issue of our time (slavery was the human rights issue of the 20th century).

After reading this book it’s hard not to be persuaded. All my life I was convinced that no evil could supersede that of American slavery in the South, but what Kristof and WuDunn write about is at least as iniquitous: It is shocking that in 2010 baby girls, often the daughters of prostitutes, are in turn being raised to be prostitutes by brothel owners; that sex slavery is a thriving industry in parts of Asia, where teenage girls are trafficked and given addictive drugs to keep them dependent and cowed, and if they show any resistance, they are brutalized. Women are often brothel owners and they frequently administer beatings or other forms of punishment: One young girl in a Cambodian brothel had one of her eyes gouged out by the female owner.

As horrific as sex slavery is, the larger root problem is that women as a whole–the female sex–have no status in much of the developing world. A ruthless, brutal misogyny seems to set the tone in some cultures. Yet societies that tend to degrade and oppress women tend to be backward in other ways as well, the authors point out. Holding back women and girls holds back everyone.

Despite the rampant ignorance and brutality it describes, this book is suffused with hope and optimism and describes the courageous ways in which many women, even formerly trafficked girls or victims of rape or of a husband’s or mother-in-law’s violence, have lifted themselves out of desperate poverty. Some Westerners have helped too:

— A retired wealthy American couple, tired of the plastic toys their grandchildren craved for Christmas, decided to do something meaningful with their money. They now help to support a maternity hospital in Ethiopia that was founded by an Ethiopian woman.

— One African American woman supported a young mother (because of rape) in Rwanda; another black American woman lived for six months in Kolkata, India, working with the children of prostitutes.

— “Women hold up half the sky,â€ so says the Chinese proverb. Read this book to find out how you can help turn oppression into opportunity for women around the world. 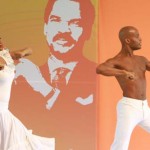 PHOTO GALLERY: The RLF Parties With a Purpose