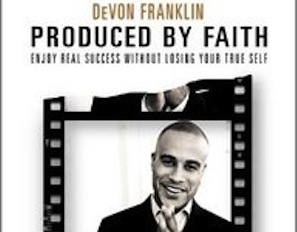 Produced by Faith: Enjoy Real Success Without Losing Your True Self (Howard Books, $23) is what author Devon Franklin intends it to be: a candid, uncompromising look at how he is building a successful career as a Hollywood film executive without compromising his faith as a Seventh Day Adventist. However, in so doing, Franklin’s book delivers on two other fronts. Produced By Faith, scheduled for release May 3, 2011, is a solid career guide, providing sound advice, strategies and tactics applicable to success in any profession. And it is a solid primer on how the film industry works and how films get made based on a complex formula of relationships, collaboration, story-telling, timing and bottom-line results. This is an excellent book for anyone (and for early- to mid-career professionals in particular) who wants to understand what they are willing or not willing to do to succeed, even if they do not see themselves as particularly religious and do not aspire to a career in Hollywood.

If conventional wisdom holds that there are certain professions where being a person of devout faith runs absolutely counter to what is required to succeed and advance, one of the first such professions that come to mind is the film industry. Hollywood, and it’s publicity driven culture of amorality and excess among the rich and famous, is routinely blamed for promoting the moral decay of America by religious conservatives. The assumption is that to succeed in such a profession, a Christian or other person of faith has no choice but to compromise their beliefs–or at least keep them on the down low while climbing the career ladder.

Franklin, 32, insists that nothing could be further from the truth, and then offers as proof his own journey from internships as a University of Southern California undergrad with film companies (including Will Smith and Jay Lassiter’s Overbrook Entertainment), to getting hired by Tracey Edmonds for his first junior executive job at Edmonds Entertainment, to his current position as vice president of production at Columbia Pictures for Sony Pictures Entertainment. Franklin is a true rarity: an African-American studio executive in Hollywood. Along the way, he’s worked on a string of hit films, including The Pursuit of Happyness and the remake of The Karate Kid starring Jackie Chan and Jaden Smith. He also worked on Jumping The Broom, featuring an all-star cast led by Angela Bassett, which opens on May 6, 2011. In Produced By Faith, Franklin explains how he has held fast to the practice of his faith while building his career. For example, as a Seventh Day Adventist, he celebrates the Sabbath, meaning from sunset on Friday to sunset on Saturday he does not work, even if that means leaving the set of a film in the middle of production, as he did during the making of The Karate Kid in Beijing, China.

Franklin uses the film-making process, from story development through film production, distribution and marketing, to illustrate how to define yourself professionally in order to build a successful, fulfilling career without compromising your beliefs. In fact, he shows how clearly communicating and living out your beliefs and values is what ensures long-term career success. Franklin covers such topics as working with people who don’t understand your beliefs; choosing a profession, industry or company that is in tune with your purpose; surviving “Development Hell”; and discovering “The Big Idea” for your life. The result is a practical, yet inspiring, guide to developing a rationale for career decisions and strategy based on integrity, character and professionalism, while still celebrating the values of ambition, achievement and personal fulfillment.

According to Franklin, who is also a preacher, a person of faith never has to choose between living their beliefs and pursuing a career with honesty, integrity and divine purpose: “Faith and works are two sides of the same coin.” He makes no bones about his life being an epic story produced by him and God, with God having the last word. Franklin literally testifies (quoting liberally, though not exclusively, from Bible scripture) as to how he’s gained everything he ever wanted in his career and more–not despite, but as as a result of, putting his relationship with God first. Produced By Faith makes a compelling case that by being unwavering in your identity and commitment as a person of faith–whatever that faith might be–you can, too.