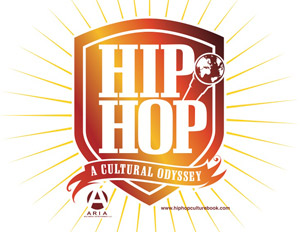 For those pressed for time, here’s the bottom line: If you love hip-hop, I mean really, truly, unconditionally love hip-hop, you must own two copies of Hip Hop, A Cultural Odyssey (Aria Multimedia Entertainment).

You’ll need one because you’ll want to read the 400-plus pages of essays, lists of top tracks, albums and other hip-hop milestones, and mind-blowing images over and over again, and so will everyone you know. (My advice: hide a GPS tracking device inside the book cover, or it will walk.) You’ll need the second because the book, currently in its first edition, is truly a collectors item, in an era where that term is nearly devoid of meaning thanks to marketing schemes saturated with hyperbole. This copy you’ll want to keep in pristine condition, to be touched by your hands only (and those of any hip-hop artists you can persuade to autograph it, instantly boosting its value) and included in your estate plan in a trust for your children’s children’s children.

Hip Hop, A Cultural Odyssey, edited by Jordan Sommers, is simply the most visually dynamic, multidimensional cultural and historical account of the birth and evolution of hip-hop ever compiled into one book. As a result, the tome is so huge, it comes with a matching backpack style tote bag–because that is the only way for a single human being to carry it anywhere. Marketed as the culture’s “first luxury, large-format coffee table book,” the book is hip-hop-mogul priced at $299.99. But trust me, this compendium is worth more than its weight in gold chains.

Part of the reason for the sheer volume of the book are the fantastic essays, which cover each of the diverse facets of hip-hop, from its roots in the soul, R&B and funk music of a Black America steeped in Black pride and post-Civil Rights Era expectations (and disillusionment) to the coalescing of its elemental forces (including emcees and deejays) to its evolution into the global cultural and commercial force it is today. Along the way, it pays tribute to nearly every era and aspect of hip-hop, including gangster rap, regional movements, White rappers and lady emcees. Without ever explicitly saying it, the book beautifully illustrates that the term “hip-hop generation” is long outdated and may have never been totally accurate. There are (at least by my count) at least four such “generations.” (At age 51, I’m of the first one, the Funkateers who danced as house-party deejays rapped in accompaniment to our favorite records with nary a thought of a recording deal until the Sugar Hill Gang, Kurtis Blow, and GrandMaster Flash and the Furious Five hit the turntables.) Hip Hop, A Cultural Oddysey not only pays tribute to all of them, it places each stage of evolution in its proper context, creating a wondrous map of the DNA of the culture. Best of all, the book allows the rappers, break dancers, deejays, emcees, producers, graffiti artists, singers and moguls who are both the creators and the created of that culture to have their say throughout the book.

The other reason for the size of the book are the breathtaking images of the scenes, memorabilia, landmarks, and of course, the people of hip-hop. In addition to iconic photos of everyone from Kool Herc and Africa Bambatta to Jay-Z and the Wu-Tang Clan, there are images, such as the Gordon Parks photograph “A Great Day In Hip-Hop,” that practically allow you to hold the entire hip-hop universe in your hands (or, more likely, on your lap). Most remarkable are the “Game Changer” profiles throughout the book, which include photo essays illustrating the evolution of the superheroes of hip-hop, including Rakim, Queen Latifah, LL Cool J, Will Smith, Russell Simmons, 50 Cent and, of course, Tupac and Biggie.

This book is not perfect. It could probably have devoted more space and attention to break dancers and the influence of hip-hop on dance in general, and as well as graffiti art and artists. The book could also have gone deeper into such topics as Black radio and cable television’s initial rejection of the culture, or the painful intertwining of drug culture, misogyny and Black-on-Black crime with some aspects of hip-hop culture. However, given that hip-hop influences and is influenced by nearly everything, I don’t hold that against the editors of Hip Hop, A Cultural Odyssey. It’s already 420 pages; any more, and they’d have to sell a matching luggage cart with the book.

My hope: That there will be other editions covering the culture of hip-hop produced by this publisher, and that every new tome will be at least as good as this first volume.

To purchase your copy of Hip Hop, A Cultural Odyssey click here and every 10 books sold will result in a copy being donated to a HBCU library.