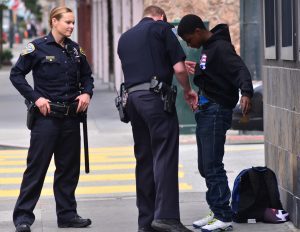 “As we strive to support local leaders and law enforcement officials in their work to protect their communities, we are mindful that effective public safety requires more than arrests and prosecutions,â€ Lynch said. “It also requires winning–and keeping–the trust and confidence of the citizens we serve. These grants will help more than 100 law enforcement agencies promote transparency and ensure accountability, clearing the way for the closer cooperation between residents and officers that is so vital to public safety.â€

And yet, experts are unconvinced that the investment in body cameras alone will improve accountability or curb the use of deadly force. “Police body cameras can only be as good as the policies which govern them allow,â€ according to Matthew Feeney, a policy analyst at Cato Institute. “Regrettably, despite calls for more police officers to wear body cameras in order to improve accountability and transparency, many police departments across the United States are governed by poor policies and practices.â€

In fact, a recent study evaluated existing body-worn camera policies at 46 police departments across the country. Departments were evaluated on the basis of eight criteria, including accessibility and accountability. Â

Body-worn cameras have also proven ineffective in terms of curbing violence. A recent study indicates that police body cameras have contributed to increased use of deadly force. “Surprisingly, we found that the use of wearable video cameras is associated with a 3.64% increase in shooting deaths of civilians by the police,â€ according to the study. “We explain that video recording collected during a violent encounter with a civilian can be used in favor of a police officer as evidence that justifies the shooting.â€

More specifically, the study found that body cameras are associated with racial disparity in fatal shootings. Blacks and Latinos are significantly more likely than Asians and whites to be shot and murdered on camera by police officers.

In order for the Department of Justice’s to achieve its goal of building trust between civilians and police through the use of body-worn cameras, all of these factors must be addressed and federally standardized policies must be adopted. Perhaps a useful framework is the Civil Rights Principles on Body Worn Cameras.

“Mobile cameras operated by law enforcement may play a valuable role in the present and future of policing,â€ according to a joint statement written by 35 leading civil rights organizations. “But police-operated cameras are no substitute for broader reforms of policing practices. Without carefully crafted policy safeguards in place, there is a real risk that these new devices could become instruments of injustice, rather than tools of accountability.â€

Jared Brown currently coordinates a $25 million initiative at the United Negro College Fund (UNCF) designed to cultivate the next generation of African American innovators and entrepreneurs. He awards scholarships and administers an online entrepreneurship curriculum to more than 150 undergraduate scholars representing more than 40 colleges and universities. He also serves as operations director at Black upStart, an early stage social enterprise that supports entrepreneurs through the ideation and customer validation processes. He is a leading voice in the field of black entrepreneurship with publications appearing in Black Enterprise, Generation Progress at the Center for American Progress, and the Congressional Black Caucus Foundation.

4 Takeaways from a Conversation with Gayle King and Elaine Welteroth: How Millennials Are Transforming Media