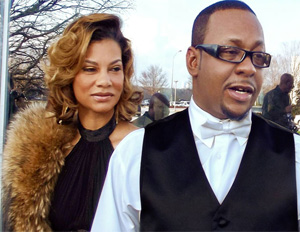 Singer Bobby Brown is reportedly taping for a new reality show with new wife Alicia Etheredge, chronicling their life as husband and wife as well as Brown’s business ventures.

This is not Brown’s first stint with reality television.

In 2005, with then wife Whitney Houston, Brown had a series entitled “Being Bobby Brown” which aired on Bravo. That series also featured his family including daughter Bobbi Kristina.