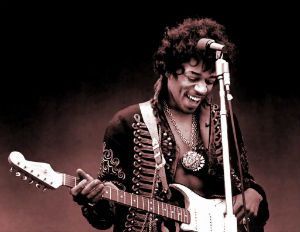 The line includes t-shirts featuring lyrics and images of Jimi Hendrix, as well as scarves, sweatshirts, dress clothes and cufflinks.Â Some pieces even include Jimi’s actual handwritten lyrics incorporated into the fabric prints.

The collection will hit Bloomingdale’s later this month, just in time for the holidays. The release will coincide with what would have been Hendrix’s 70th birthday.

Read the story at EURweb.