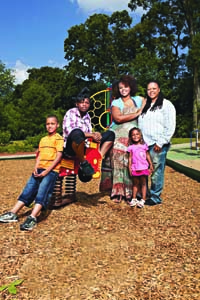 Adhering to sound money managementÂ  principles requires substantial discipline for most individuals. So imagine the amount of patience and persistence it took to implement these ideals in a blended family. That was a hurdle Conyers, Georgia, couple Keesha Gipson Monroe and Julia Hamilton faced–and successfully crossed–when they combined their households in July 2010.

“It was a difficult experience; we had to compromise and let go of our past beliefs. We had to change some destructive spending habits and make budgeting and saving a priority,â€ admits Gipson Monroe, a 33-year-old program director at a youth arts foundation in metro Atlanta. She has a 9-year-old son, Joseph, and a 3-year-old daughter, Kaia-Simone.

Her partner, Hamilton, 35, has a 12-year-old daughter, Semaya. The families moved in together when they relocated about 25 miles east of Atlanta to Conyers from Plainfield, New Jersey. Gipson Monroe and Hamilton plan to have a commitment ceremony in September in a state that grants same-sex marriage licenses. Under Georgia law, same-sex couples are not entitled to all of the legal rights and benefits–such as filing joint tax returns and Social Security survivor benefits–given to married heterosexual couples.
Regardless of their marital status, the couple is committed to merging their finances and following a strict budget, which accounts for all aspects of their spending and saving.

Even though Gipson Monroe always deposited money into her savings account and planned for long-term goals, her ex-girlfriend had a lucrative career and often doled out money to her and her son. She admits that frivolous spending was one of the “destructiveâ€ money habits she had to eliminate. Now, thanks to Hamilton, she keeps track of what she spends and encourages her son to do the same. “I learned the importance of a budget and healthy spending habits, discipline, and paying attention to every dime that is spent. That is the only way I can maximize the money that I earn and save,â€ Gipson Monroe says.

Hamilton helped Gipson Monroe become a more conscientious spender. But Gipson Monroe, who was raised with an entrepreneurial father who stressed the importance of paying yourself first, helped Hamilton learn to set aside money for savings before paying bills. This was a foreign concept for Hamilton. “It was hard because I felt selfish. I couldn’t see how it would work, but it works.â€ Hamilton is an executive producer at an Atlanta-based multimedia production company. She also oversees Gipson Monroe’s theater company, M.PoWeR Performing Arts.

When A Homeownership Dream Becomes A Nightmare