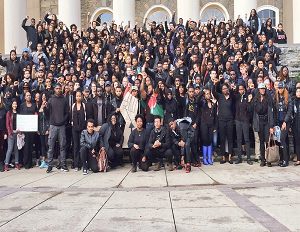 Years of racial unrest at the University of Missouri came to a tipping point this week when the university’s system president and chancellor resigned Monday from their position amid student protest and criticism of racial injustice on campus.

With combined efforts from the group Concerned Student 1950, grad student Jonathan Butler’s hunger strike, and the Mizzou football team, the tensions on University of Missouri’s campus were brought to national headline news with many people taking to social media to voice their concerns around the problem. While some students, including those at Yale University and Ithaca College, started their own protest to fight back against racial discrimination on their campus, many college students across the nation pledged to wear all black on Thursday in solidarity with Mizzou.

Other supporters of the students showed their concerns for the issue by sharing their personal story of campus discrimination on Twitter using the hashtag #BlackOnCampus. See a few of the alarming tweets below that represent several cases of racial injustice at educational institutions across the nation.

When I was in law school a classmate asked me: “Do you students take the same tests we take?” #BlackOnCampus.

When you mention that you received a scholarship, & classmates ask what sport you play B4 acknowledging that it was academic. #BlackonCampus

Being called a “reverse racist” by many of my fellow White peers for bringing up White privilege in American society. #BlackOnCampus

RT @ClaytonCrook: When the univ cancels class for a football game but not when threats are made at entire black student body #BlackOnCampus

When your RA puts this up as the flyer for quiet hours… #boilersofpurdue #blackoncampus pic.twitter.com/XfVHpUKfG9

Generation Boss: How Millennials Can Use Creative Talents to Fund Dreams