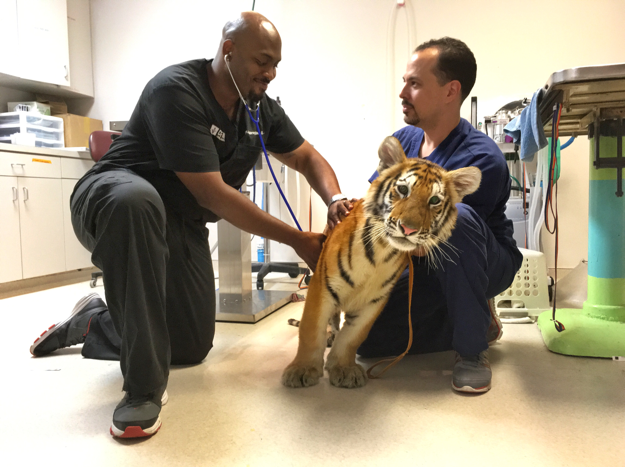 It’s a phenomenon that is “kind of like a unicorn thing,” muses Dr. Diarra Blue about African American veterinarians launching and running a thriving animal hospital. And not only do they run the Cy-Fair Animal Hospital in the Houston area, but they also are the subjects of a hit TV show on the Animal Planet channel, The Vet Life. Dr. Blue is one of the stars of the show, which just kicked off its third season this weekend.

The Vet Life‘s other veterinarian stars include Dr. Aubrey “AJ” Ross and Dr. Michael Lavigne. The show offers insight into the day-to-day operations of a seemingly very successful and busy veterinarian practice. These doctors are not just tending to cats and dogs either. The last seasons have shown them tending to fighting roosters, hyenas, and even a tiger. The new season opened up with a very poignant look at how the hospital is dealing with not just the thousands of animals broken, injured, and stressed by the aftermath of Hurricane Harvey, but also how the doctors and staff deal with the emotions of people in the community who have suffered so much loss.

“Our facility was protected,” says Dr. Ross. “We shut the clinic down for six days to make sure our staff and clients did not have to go out in the elements. One of our technicians lost everything in the hurricane, but we came together as a family.”

The TV show also showcases the very real and genuine affection the three vets have for each other since they met while studying at Tuskegee University. “We are literally best friends,” says Dr. Ross. “Our wives hang out with each other.” The trio practiced veterinarian medicine in Nevada after graduating from Tuskegee. Yet, they always had entrepreneurial dreams of launching their own practice, leaving Nevada on “a hope and prayer,” according to Dr. Blue.

First, they had to raise the funds to launch a vet practice—an endeavor that can cost up to $1 million just to open a small clinic, according to The Balance.

“We definitely had to deal with some banks, as far as loans,” says Dr. Lavigne. “But it was something that the three of us had started planning for several years in advance when we were still practicing in Las Vegas.”

“In the end, you’re going to need some financial assistance to get started,” Dr. Lavigne continued. “Luckily, the practice is doing well and we are able to make those payments back.”

And how did they make the jump from vets to TV stars? Dr. Blue explains. “Other than a blessing, my sister had the idea to film three black veterinarians that were taking care of their families, doing their jobs…” They, along with an independent production company, presented the idea and sample film to Animal Planet, which the channel loved.

The African American community has had, historically, a somewhat tenuous relationship with household pets. As a black woman whose roots hail from slaves in the Southern United States, I was mostly raised with the idea that dogs and cats were used as tools. My great-grandfather had coonhounds who always slept outdoors and were used to hunt varmints for dinner or to alert my great-grandparents when a stranger approached the property. Cats were mousers—only given affection, fresh water, and shelter from extreme weather if they successfully hunted rodent infestations.

Black people have been slower than white Americans, anecdotally, to embrace pets as members of the family; sleeping in beds with us, and being dressed up in costumes every holiday. Yet, as African Americans continue to make gains educationally and economically, there is an ongoing shift with the relationship black people have with their pets.

According to Michael Johnson, vice president of marketing information for Chuck Latham Associates of Parker, Colorado (a sales and services provider for retailers and distributors in the pet specialty, veterinary and farm agriculture channels), speaking with PetBusiness.com, “80% of pet spending is done by Caucasian consumers and 80% of pet caretaking is done by women. That makes the white female the primary marketing target—as she has been for many years,” he says.

“The key point, however, is there’s a whopping 20-20 out there we’re not paying attention to,” he says. “That 20-20 is comprised of the less well-off, comprised of Hispanics, comprised of Asians, comprised of African Americans who all own pets in varying degrees and who all, at a much faster rate, are outpacing the growth of the ‘pet parent,’ so to speak.”

Black people are increasingly embracing pets as family; something that has not gone unnoticed by the vets of Cy-Fair. On why African Americans are getting closer to their animals and why people in general, are so fanatical about their pets, Dr. Blue says, “It goes back to the human-animal bond. There’s a bond between a pet and an owner.”

Dr. Ross also advised on how well-meaning pet owners can diminish the often-high costs associated with pet care. “I think the best thing to do is know what the benefits are between preventative medicine and reaction medicine. When we go for the preventative like heartworm, we’re talking about, literally, between $27–$30 per month versus if your dog gets heartworm disease—you’re talking about $1,000–$2,000 depending on where you are.”

He also says develop a relationship with your vet and to “start saving.” Dr. Ross suggests that taking out a pet insurance policy can help manage unforeseen costs.

The vets of Cy-Fair are also dedicated to being representative of African Americans in the STEM (Science, Technology, Engineering, and Math) fields. They weighed in on the recent news that Black Enterprise reported of declining numbers of African Americans entering the medical field.

“Having those role models is probably a big factor why we aren’t seeing a large amount of black students entering the medical field,” says Dr. Lavigne. “And that’s something we are hoping to change, especially with the show. Getting it out there so people can see people who look like they do—we do get students all the time to promote young minority kids who want to get into the vet field or any medical field.”

Dr. Lavigne notes that there are increasing numbers of students of color entering vet schools such as Cornell. Dr. Blue sums it all up as a need for cultural change and emphasizes the role models that Dr. Lavigne mentioned.

“If you see someone who looks like you, you can do it,” says Dr. Blue.

The Vet Life‘s third season appears on Animal Planet at 10 p.m. on Saturday. 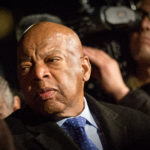 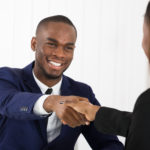