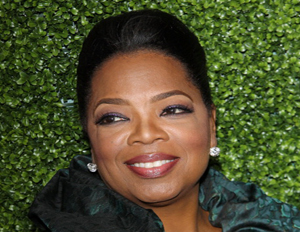 I love Oprah and my Twitter timeline can cosign how much I cherish her work. But I am so disappointed with a large portion ofÂ Oprah’s Next Chapter interview with two-time Olympic gold medalist Gabrielle Douglas, which aired on Ms. Winfrey’s television network OWN on Sunday.

Thirty minutes prior to the interview, I was co-hosting my show,Â Ask a Sista: Black Women Muse on Politics, Policy, Pop Culture and Scholarship with Jenifer Daniels and Cheryl Contee, during which we discussed bothÂ theÂ Next Chapter interview withÂ Barbadian pop starÂ Rihanna the previous week and her then-upcoming discussion with Douglas. I was sitting on the edge of my seat for this interview, as so many young, gifted members of “Black Twitter.â€ Many of us found ourselves disappointed and, in some cases, disgusted like we were with NBC’s coverage of the 2012 London Olympics.

I was live-tweeting the show (as I often do), so you may have seen my tweets detailing my displeasure with the interview. I took to the Twitterverse to share my thoughts on the episode, and a Twitter debate with the talk-show legend herself ensued. I was not alone in my criticism but Oprah tweeted me twice, to explain her position.

Mainstream media outlets like ESPN and USA Today outrageously amplified e-criticism about Douglas’ hair, propelling the discussion beyond our nation’s borders. Thousands of insightful discussions and cheerful commentary were overlooked and bumped byÂ the more sinister, critical, mean-girl minority narrative of a virtual handful of folks, percentage-wise, on Twitter–all the while ignoring the fact that many Black women and girls do not like the “Flying Squirrelâ€ nickname for “Gabby.â€

It was inevitable that, for the media maven’sÂ Next Chapter interview with Douglas, she would have to address the hair issue, but I was mostly looking forward to hearing from her mother, siblings, coach Liang Chow, and (white) host family. We all expected Winfrey would do it BIGGER and BETTER than every other media outlet. I was sharing my thoughts, minute-by-minute, as a viewer. When the 16-year-old Virginia Beach native told Winfrey that she preferred to be called “Gabrielle,â€ even after Winfrey prefaced her statement with, “You’ve got to be kidding me.â€ I was so proud of her, as it brought me back to Laurence Fishburne’s discussion on how his interactions with Roscoe Lee Browne and August Wilson led him to stop letting the entertainment industry call him “Larry.â€