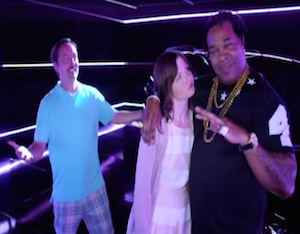 Today marks a sad day for fans of Hip-Hop and the culture, as veteran lyricist Busta Rhymes made waves for all the wrong reasons.

In an example of not-so-great marketing, Toyota brought back their equally not-so-popular “Swagger Wagon” family to co-opt rap music for the mainstream masses. To help lend some credibility to the all-American family, the car company enlisted the Brooklyn legend to spit a guest verse, which ended up looking like a “When Keeping It Real Goes Wrong” skit.

Upon watching, there are just a few things we noted: 1) Busta Rhymes probably didn’t get paid as much as the advertising team who pitched him; 2) This is three-minutes that you will never get back (you’ve been warned); and 3) Black Twitter was absolutely incensed by Bussa Buss and his treachery. If there is anything that you can count on is that Black Twitter will express themselves in a nanosecond and suburban America shouldn’t be proud of this moment.

The slander has been really real for Bus lately after his outlandish outfit at the 2014 BET Awards and his attempt to return to his former Samson-esque self. As we expected, the Black Twitterverse had little regard for the vet’s reputable career, and delivered the boom for all to see and retweet. You can peep some of the most interesting reactions (plus the actual commercial) in the gallery on the following pages.

Let us know if you think Busta Rhymes’ career has gone past the point of no return in the comments.