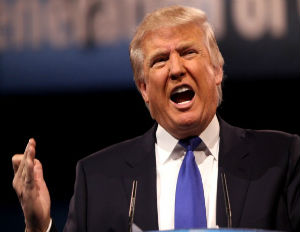 Another day, another disturbingly violent incident at a Trump rally.

On Wednesday, a black man was brutally assaulted by a Trump supporter at a rally held in Fayetteville, North Carolina.

The peaceful protestor, Rakeem Jones, 26, was being escorted out of the rally by security when he was viciously attacked by a white man in a cowboy hat. The assaulter, 78-year-old John McGraw, approached Jones and sucker-punched him in the face, drawing applause and cheers of approval from the crowd of Trump supporters.

McGraw was later arrested and charged with assault, but the officers handling the situation have since come under fire for calmly walking past McGraw and not making the slightest attempt to apprehend him.

Instead, the officers chose to throw Jones to the ground, while placing him in handcuffs. Multiple videos have surfaced depicting the entire incident, which include admonishing the cops for their unnecessary use of force against a man who had just been victim to a vicious, unprovoked assault.

According to the Cumberland County Sheriff’s Office, the actions of the officers will be subjected to an internal review.

[WATCH] WPS Attendees Share What Mentorship Means to Them

How To Leverage Your Unique Power