Iâ€™m A Black Professor At A PWI And That Matters 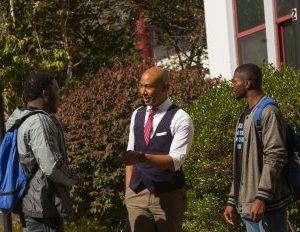 This article originally appeared on The Well, Jopwell’s digital magazine.

Earlier this fall, I ran into one of my most promising students near the quad on campus.

Like many of my students do, he replied “goodâ€ without much thought. I always like to probe a bit deeper, so I asked, “What the hell does that mean?â€ Matt smiled and told me he just came from the tutoring center to get help with my introduction to business course because he isn’t “smart like the other kids.â€

“Timeout. Are you saying you aren’t smart?â€ I replied.

He quickly attempted to rephrase his statement, but I interrupted him. “Is it that they are smarter than you, or do they put in more effort than you?â€

We proceeded to have a 10-minute conversation about life, working hard, and having a positive attitude. Then we shook hands and went our separate ways.

That was the last time I saw Matt. He died in a car crash three days later.

Our conversation resonates with me even more now, after his untimely death. Matt’s perspective on his place within a college campus is not unique. In fact, I find considering oneself an outsider to be very common among students of color at predominantly White institutions (PWIs). They see few peers (and often even fewer faculty members) who look like them, take courses in which most subject matters do not mention their experiences, and regularly fall victim to the ignorant assumptions of those around them. Since I, a Black man, started teaching in 2013, my students of color have shared with me some of their innermost thoughts, questions, and fears, many of which are closely intertwined with their identities and experiences as people of color. A few examples:

“This isn’t the place for me. I don’t feel like I belong.â€

“I don’t want to go back to the hood, but I might not have a choice.â€

“My dad is a hustler and is in and out of jail.â€

“My mother is addicted to drugs and is in and out of homeless shelters.â€

“My cousin just got life in prison.â€

“My girl just got an abortion.â€

Being a professor of color at a PWI provides me a rare perspective on these students’ experiences and a crushing reality check about my dual responsibility. Yes, my job description states that I am to teach, advise, build curricula, and join committees. But I also often have less official roles as a mentor, psychologist, social worker, advocate, life coach, cheerleader, drill sergeant, and big brother. Is it fair or right for me to carry this extra responsibility? That’s not that relevant. I am reminded of Freeman Montague, Jr.’s poem, entitled “He Ain’t Heavy, He’s My Brother.â€ My favorite line reads, “When asked, ‘why weigh yourself down with load of another?’ I simply smile at them say, ‘He ain’t heavy … He’s my Brother!’â€

I am a 36-year-old professor of business largely because countless people have poured their support into me and seen in me what I could not see in myself. I know what many of my students of color are experiencing. At their age, I too was intimidated by the college experience and questioned whether I belonged on campus. I felt like none of my teachers understood my background or upbringing. One linguistics professor led a class discussion on African-American dialect and, much to my and my five Black classmates’ dismay, focused solely on stereotypical phrases like “yo, yo, yo, whaddupâ€ and “where da party at?â€ Others on campus communicated in microaggressions. I recall being told with bewilderment, “You’re so articulateâ€ and asked with surprise, “You really like to read?â€

So now that I’ve “made it,â€ I must be my brothers’ and sisters’ keeper. I must go from meetings about curriculum revisions with deans and vice presidents to convincing a young man that the dividends of a college degree are much greater than selling drugs on the street.

I share my students’ stories (always maintaining their anonymity) with my colleagues so that those who might be sincerely ignorant of their students’ realities do not dismiss them as being lazy, unmotivated, or unintelligent. This information is often met with astonishment, both that a student would divulge something so personal to me and at the realities and choices students of color face. Their reactions remind me that there is an experience gap in higher education and it has nothing to do with seniority. To bridge it, PWIs need more faculty and staff of color.

As one of the few, my greatest hope is that I can serve as a role model and flood my students’ minds and spirits with the encouragement they need to go forward. My greatest fear is that too many voices will discourage and make excuses for them and that they will never recognize their true potential. We can’t let that happen.

*Name has been changed.

The Well is the digital magazine of Jopwell, the career advancement platform for Black, Latino/Hispanic, and Native American students and professionals to unlock opportunity. Subscribe to receive weekly stories and advice in your inbox. 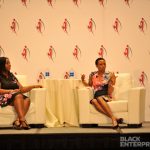 Women: Why You Need to Learn to Stop Trying to Do It All