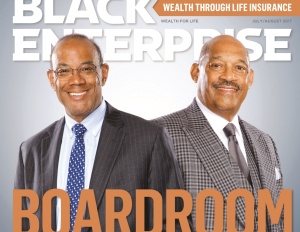 The July-August 2017 issue of Black Enterprise

For five years now, Black Enterprise has been chronicling the African Americans who serve on the board of directors of America’s largest publicly traded corporations. This year we’ve expanded the universe of companies from the top 300 companies listed on the Standard & Poor’s 500 to the full S&P 500 to gain a more complete picture of black board members in corporate America.

So why should you or the average person care about the 292 blacks sitting on the board of directors of 303 companies? Or about the 197 companies who have boards without a single black director?

The answer is simple: The decisions made in these boardrooms affect us all. Based on the guidance these directors provide to CEOs and senior management, the entire black community stands to gain—or lose.

The Power of the Board of Directors

The role of the corporate director is ensuring the creation of shareholder value, and their impact—specifically when it comes to diversity—has traditionally focused on three areas: people, procurement, and philanthropy.

People is about employees and managers; boards have a say in the policies that determine which people companies choose to hire, train, promote, and fire.

Procurement is focused on suppliers; boards have oversight of corporate expenditures which includes guidelines that determine which businesses will provide services ranging from major construction projects to asset management.

And philanthropy is about corporate giving; boards have a large say in what causes companies support.

So if you care about jobs for African Americans, contracting opportunities for black-owned businesses, or the allocation of dollars to support nonprofit organizations in our communities, then you must care about diversity on the board of directors.

“Companies in the Fortune 500 spend trillions of dollars buying goods and services. What we want to do is influence those companies to spend those dollars with black-owned companies,” explains Bruce Gordon, who joined the board of directors of CBS Corp. in 2006.

“Companies also spend billions of dollars in communities around a whole range of philanthropic issues. Think of our arts institutions. Think of the Smithsonian National Museum of African American History and Culture—one of the most important cultural projects in the history of our country. I know for a fact that directors across the country, particularly African American directors, were influential in getting their companies to support the construction of that institution.”

“Having an African American at the table means they can influence policy. If we use our voices appropriately, then our communities are the beneficiaries of what we do,” Gordon continues. “People need to understand how important this is. Our people in our community should care about that.”

Gordon’s assessment becomes increasingly important with the new configuration of the Black Enterprise Registry of Corporate Directors, which identifies African Americans with fiduciary oversight of trillions of assets and millions of stakeholders. This year’s list includes 292 board members on the S&P 500, impacting policies ensuring their financial viability and global competitiveness.

In contrast, roughly 40% of the nation’s largest corporations across myriad sectors do not have a single African American occupying a seat on its board of directors.

If you’re looking for a real-life example of the impact that boards can have, look no further than the recent protests in Charlottesville, Virginia, and the fallout between President Donald Trump and the business community after he blamed the violence on “all sides.”

Merck’s Kenneth Frazier, one of corporate America’s few black CEOs that can be found on BE’s Registry, was the first to resign from Trump’s American Manufacturing Council, citing his “responsibility to take a stand against intolerance and extremism.”

He was followed by CEOs of Intel and Under Armour. Plans of a mass defection from other members led Trump to disband the council.

Such decisions, Gordon maintains, are often reviewed by directors and influence corporate value. “Ken Frazier took the lead—I know him, and I know he’s a principled person, but CEOs are not just representing their personal views.”

“They have to act in the best interest of the company and the investor. They’re protecting their company’s brand, their image, their reputation. They’re being sensitive to their shareholders, their customers, their employees,” says Gordon.

“I’m sure that some, if not all, sought counsel and advice from their board members. They knew they were taking highly visible positions. My guess is that as they thought their positions through, they reached out to their boards for guidance.”

Gordon’s insight about board members’ behind-the-scenes role was substantiated just days later when The Wall Street Journal reported that chief executives had been “brooding” to their boards for months over Trump’s statements, behavior, and policies, leading to informal conversations among directors about what to do.

The Journal also reported that Frazier called Leslie A. Brun, the African American lead director of Merck’s board, the night before his resignation regarding his decision.

Current events continue to raise questions regarding the role of public companies when it comes to such social issues facing our country. And it speaks not only to our theme of the power these directors wield in the boardroom, but to the responsibility they carry as well.

A Seat at the Table is Just the Beginning

Some African American directors believe all board members share the same responsibility. “I feel my role is consistent with other members of public company boards of directors in that I offer my unique perspectives and ideas,” says Linda Gooden, who sits on the board of The Home Depot.

“And, I encourage diversity as a business imperative to ensure the business has access to the broadest pool of perspectives, skill, and ideas to add value to the organization.”

Even with increasing pressure from today’s consumers and employees for companies to take a stand on social issues, some directors don’t believe their objectives have shifted.

“I don’t think the current climate has changed what I view as my core responsibility as a board member. At the end of the day, a board member must exhibit a moral conscience and be able to apply a value system in ways which are constructive and integral to helping the company deal with the complexities of the many types of issues we face today,” says Rodney C. Adkins, a member of the UPS board.

Others feel that being a black director comes with a unique obligation. “I do feel I have a responsibility as a black board member,” says Sherwin-Williams Co. director Matthew Thornton.

“As black board members, when engaging in discussions and decisions on corporate governance and social issues, we have to ask ourselves, ‘Where and how can we make a meaningful difference?'”

“Having a seat at the table gives black board members the visibility and voice that will help companies connect the dots and focus on diversity and inclusion as critical aspects of long-term success.”

But a vocal few feel that with so much on the line, it’s unacceptable for black directors to take anything less than an activist stance.

“It is useless to advocate for diversity in the boardroom if we’re silent when we get there,” Gordon says bluntly.

“If you’re at the table and don’t use that seat to advance issues that are relevant to our community, then you’re wasting it and shouldn’t even be in the room. Get out of the seat and let somebody else have it.”

For the 2017 B.E. Registry of Corporate Directors, click here.

The Black Men XCEL Summit Ultimate Recap: All The Highlights! 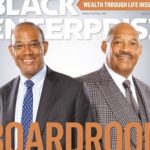