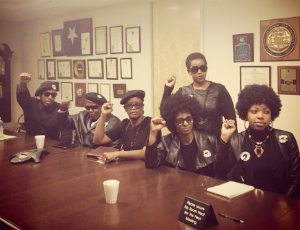 1. WE WANT FREEDOM. WE WANT POWER TO DETERMINE THE DESTINY OF OUR BLACK AND OPPRESSED COMMUNITIES.

We believe that Black and oppressed people will not be free until we are able to determine our destinies in our own communities ourselves, by fully controlling all the institutions which exist in our communities.

2. WE WANT FULL EMPLOYMENT FOR OUR PEOPLE.

We believe that the federal government is responsible and obligated to give every person employment or a guaranteed income. We believe that if the American businessmen will not give full employment, then the technology and means of production should be taken from the businessmen and placed in the community so that the people of the community can organize and employ all of its people and give a high standard of living.

3. WE WANT AN END TO THE ROBBERY BY THE CAPITALISTS OF OUR BLACK AND OPPRESSED COMMUNITIES.

We believe that this racist government has robbed us and now we are demanding the overdue debt of forty acres and two mules. Forty acres and two mules were promised 100 years ago as restitution for slave labor and mass murder of Black people. We will accept the payment in currency which will be distributed to our many communities. The American racist has taken part in the slaughter of our fifty million Black people. Therefore, we feel this is a modest demand that we make.

4. WE WANT DECENT HOUSING, FIT FOR THE SHELTER OF HUMAN BEINGS.

5. WE WANT DECENT EDUCATION FOR OUR PEOPLE THAT EXPOSES THE TRUE NATURE OF THIS DECADENT AMERICAN SOCIETY. WE WANT EDUCATION THAT TEACHES US OUR TRUE HISTORY AND OUR ROLE IN THE PRESENT-DAY SOCIETY.

We believe in an educational system that will give to our people a knowledge of the self. If you do not have knowledge of yourself and your position in the society and in the world, then you will have little chance to know anything else.

6. WE WANT COMPLETELY FREE HEALTH CARE FOR ALL BLACK AND OPPRESSED PEOPLE.

We believe that the government must provide, free of charge, for the people, health facilities which will not only treat our illnesses, most of which have come about as a result of our oppression, but which will also develop preventive medical programs to guarantee our future survival. We believe that mass health education and research programs must be developed to give all Black and oppressed people access to advanced scientific and medical information, so we may provide ourselves with proper medical attention and care.

7. WE WANT AN IMMEDIATE END TO POLICE BRUTALITY AND MURDER OF BLACK PEOPLE, OTHER PEOPLE OF COLOR, ALL OPPRESSED PEOPLE INSIDE THE UNITED STATES.

We believe that the racist and fascist government of the United States uses its domestic enforcement agencies to carry out its program of oppression against black people, other people of color and poor people inside the united States. We believe it is our right, therefore, to defend ourselves against such armed forces and that all Black and oppressed people should be armed for self defense of our homes and communities against these fascist police forces.

8. WE WANT AN IMMEDIATE END TO ALL WARS OF AGGRESSION.

We believe that the various conflicts which exist around the world stem directly from the aggressive desire of the United States ruling circle and government to force its domination upon the oppressed people of the world. We believe that if the United States government or its lackeys do not cease these aggressive wars it is the right of the people to defend themselves by any means necessary against their aggressors.

9. WE WANT FREEDOM FOR ALL BLACK AND OPPRESSED PEOPLE NOW HELD IN U. S. FEDERAL, STATE, COUNTY, CITY AND MILITARY PRISONS AND JAILS. WE WANT TRIALS BY A JURY OF PEERS FOR All PERSONS CHARGED WITH SO-CALLED CRIMES UNDER THE LAWS OF THIS COUNTRY.

We believe that the many Black and poor oppressed people now held in United States prisons and jails have not received fair and impartial trials under a racist and fascist judicial system and should be free from incarceration. We believe in the ultimate elimination of all wretched, inhuman penal institutions, because the masses of men and women imprisoned inside the United States or by the United States military are the victims of oppressive conditions which are the real cause of their imprisonment. We believe that when persons are brought to trial they must be guaranteed, by the United States, juries of their peers, attorneys of their choice and freedom from imprisonment while awaiting trial.

When, in the course of human events, it becomes necessary for one people to dissolve the political bonds which have connected them with another, and to assume, among the powers of the earth, the separate and equal station to which the laws of nature and nature’s God entitle them, a decent respect to the opinions of mankind requires that they should declare the causes which impel them to the separation.We hold these truths to be self-evident, that all men are created equal; that they are endowed by their Creator with certain unalienable rights; that among these are life, liberty, and the pursuit of happiness.Â  That to secure these rights, governments are instituted among men, deriving their just powers from the consent of the governed; that, whenever any form of government becomes destructive of these ends, it is the right of the people to alter or to abolish it, and to institute a new government, laying its foundation on such principles, and organizing its powers in such form as to them shall seem most likely to effect their safety and happiness. Prudence, indeed, will dictate that governments long established should not be changed for light and transient causes; and, accordingly, all experience hath shown that mankind are most disposed to suffer, while evils are sufferable, than to right themselves by abolishing the forms to which they are accustomed. But, when a long train of abuses and usurpation, pursuing invariably the same object, evinces a design to reduce them under absolute despotism, it is their right, it is their duty, to throw off such government, and to provide new guards for their future security.

How’d You Do That?: Travel Writer Kristin Braswell Talks Living Her Dream

The Pros and Cons of Millennial Job-Hopping