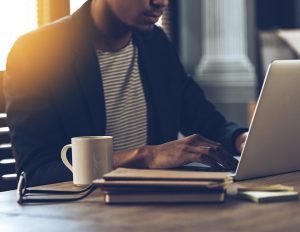 Call it an “if you don’t know, now you knowâ€ moment–a new Nielsen consumer report solidifies the empowering impact of black young adults who use the internet to initiate change and speak up against injustices. Though it might be news to some, it doesn’t come as a surprise to black millennials who dwell in the realms of social media and know just how powerful their collective voices can be.

DescribingÂ them as “influential leaders and catalysts of social awareness against discrimination and social injustice,â€ the Young, Connected and BlackÂ report found that black millennials are driving social change through technology and social media by raising awareness and prompting national discussions on civic and political issues.

Citing the #BlackLivesMatter, #BankBlack, and #OscarsSoWhite social media movements–all of which sparked national conversations–the report underscored how influential black millennials have been and continue to be in bringing national awareness to issues affecting the black community and leading the way in facilitating institutional change through their use of social media for community-based activism.

Technology, particularly social media, is transforming and elevating the way African Americans use mobile devices. According to the report, 91% of blacks own smartphones — the second-largest multicultural group behind Asian Americans (94%).

The reportÂ also highlights how African Americans and African American millennials are not only empowering social justice movements through digital means, but also affirming their identities, valuing beauty and nutritional needs, and starting businesses at upward rates, further adding to their impact on the changing economic, consumer, and digital landscapes.

Here are some findingsÂ worth noting:

In the wake of social issue protests earlier this year, the hashtag #bankblack, born out of hip-hop artist Killer Mike’s economic solution to help the black community, paved the way for a plan encouraging at least 1 million African Americans to deposit $100 in one of the 23 U.S. black-owned banks. The report noted that Atlanta-based bank, Citizen’s Trust, saw an increase in deposits as 8,000 people opened new accounts totaling $800,000 in deposits.

Black millennials use technology and social media almost as extensions of their personal identity, the report claimed. “Fifty-five percent of black millennials say they spend an hour or more daily on social networking sites, which is 11% higher than the total millennial population,â€ the report added. Facebook, YouTube, and Twitter are the most common social networking sites with strong black membership among all ages.

The report found that African American entrepreneurship, particularly in new businesses founded and led by black women, has grown substantially over the last few decades. Drawing figures from the U.S. Census Bureau for 2004, 2009, and 2014, black female-owned businesses have grown 67% since 2007 and 178% since 2002. Citing numbers from the U.S. Census Survey of Business Owners, from 2007 to 2012 the number of majority black-owned businesses grew 34%.

Can Drones Help Your Business Take Off?

2Brand You: Build Your Brand Effortlessly