Black Kids Need Black Teachers â€“ Or Do They? 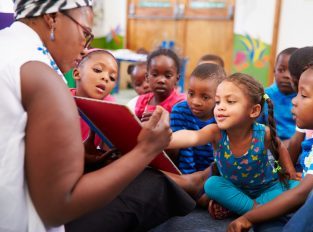 No doubt you saw the headlines last week: One read, Having Just One Black Teacher Can Keep Black Kids in School.

Studies have shown repeatedly that black teachers have higher expectations of black children (which is another way of saying that white teachers are racist).

But the study results that splashed across media platforms most recently showed the long-term effects of having a single black teacher in third, fourth, or fifth grade. Low-income black boys in those grades, who were randomly assigned to a black teacher, were found to be 29% more likely to want to go to college and 39% less likely to drop out of high school. The effect was greatest among this group, though most black students were positively affected.

On one hand, this is good news. The results indicate that persistent attainment gaps can be narrowed by strategic policy changes. If by having one black teacher in one of those grades a poor black boy begins to think that college is for him and not just for others that may, indeed, be good news.

My concern is that this research could be used in less enlightened ways and that the poorest kids would get black teachers, but not necessarily good teachers.

I spoke with Nicholas Papageorge, an economist at Johns Hopkins University and a co-author of the study, to voice my concerns and find out more.

“We looked at race, period,â€ Papageorge told me when I asked if it was the quality of the teacher that made the difference. But teasing out why black teachers make such a positive difference in the lives of these children is the researcher’s next challenge.

Papageorge also stated that “race isn’t the answer. We’re not saying that.â€ He acknowledged the many problems low-income boys face and the need to address them but also sees so-called race matching as something that could become part of the policy toolkit.

I also spoke with Ron Walker, the executive director of COSEBOC, or the Coalition of Schools Educating Boys of Color.

Although Walker says he has worked with “qualified white teachers who care,â€ his preference is for “quality black male teachers who can model intellectual rigor, character, persistence, and grit to dispel any myths that black boys may have seen or heard about black men.â€

But Walker also said he would “choose a qualified white teacher over an unqualified black teacher.â€

Women Are Crowdfunding Their Maternity Leave in Droves