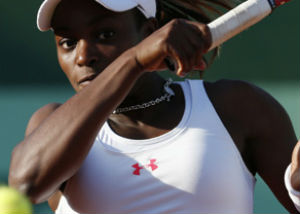 The US Open kicks off today. The player to beat on the women’s side is, of course, Serena Williams, who is vying to win the tournament for a fifth time. She’ll also be, at 31, the oldest singles champion — all in a year where she’s played the most matches in her career.

While it’s no secret that Serena wants to win 20 grand slams, she could have as much as another 2-3 good years of tennis in her. This got us wondering: Other than Sloane Stephens, who’s poised to be the next No. 1?

Here are a few faces you’d do well to familiarize yourself with. They’re next.

Vickery defeated Alexandra Kiick at the USTA Girls’ 18s National Championship in San Diego to earn her spot in the main draw at the US Open. Vickery’s mother, Paula Liverpool, worked as a bartender at a Miami strip club to make sure her daughter had top-flight coaching. Vickery is of Guyanese descent and she’s probably one of the smallest players on tour. Of course, she’s probably also one of the fastest.

Black’s polish to her game is due in large part to coaching from her father, Sylvester, who was a former member of the Jamaican Davis Cup team. She’s so young, she’s actually probably ahead of schedule in terms of her development. Look for her to make a splash on the women’s tour sooner than later.

He says he wanted to be the world’s No. 1 player in the world, and there’s no indication that Francis Tiafoe isn’t well on his way. He has a twin brother and an amazing story: his father worked as a janitor at the Tennis Center in College Park, Maryland. He even lived there with his brother and father. He’s had a few bumps in the road in his development, but the USTA is desperately seeking its next American star. Tiafoe has as much promise as anyone in the country.

Playing some of her best tennis of late, Townsend seems to have recovered from the emotional fallout of last year’s tournament. The USTA openly worried about her level of fitness during last year’s US Open and benched her. But she’s back at Flushing this year and has rebounded nicely.

With three hard-fought victories during US Open qualifying, Duval played herself into the main draw after winning, 6-3, 6-3 against Tereza Mrdeza of Croatia. Her reward? A first-round meeting with 2011 Open champion Samantha Stosur.

She will take on No. 9 Jelena Jankovic in the first round, but a loss shouldn’t discourage this promising 18-year-old. She’s got a balanced game, and is fast becoming one of the most marketable young players on tour. The US Open is played on her best surface, so despite her inexperience, she’s got a puncher’s chance.

James Blake to Retire After 2013 US Open

How Your Business Can Profit From the New Industrial Revolution