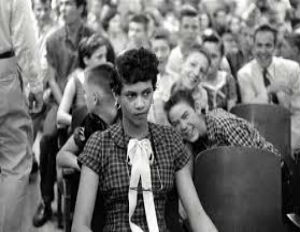 A dignified Dorothy Counts in 1957

Last week, Â I attended a seminar for education journalists, and, among many other things, I learned about Dorothy Counts, a beautiful young woman, who, in 1957, became the first black student to integrate Harding High School in Charlotte, North Carolina.

Until last week, I’d never heard of Counts. Her experience making history was brief and painful. White students spat on her and, in the cafeteria, spat in her lunch. They threw trash at her and told her to go back to Africa, the Huffington PostÂ reports.

“I did not feel I was being protected in any way within the confines of the school, because there were adults there and they did nothing,â€ Counts-Scoggins, as she is now known, says. “Teachers ignored me as if I was not even in the classroom. If I raised my hand, I wasn’t acknowledged.â€

After four days of this abuse and neglect, Dorothy’s parents withdrew her from Harding for her own safety, and sent her to Philadelphia to continue her education, I learned at the seminar.

There Is No Happy Ending

I wish I could say there is a happy ending to this story. Oh, yes, a member of the harassing crowd apologized–years later–and the school named its libraryÂ for Dorothy Counts, who is now 74.

But, the school Dorothy integrated is now mostly black.

I just spoke with a colleague who recently attended Charlotte-Mecklenburg schools. She told me she was the target ofÂ unkind racial comments in her majority white school, and that her sister’s teacher publicly referred to her friends as a “brown posse.â€

Segregated by Race and Class

In the Post, Counts-Scoggins says the segregated school she attended as a child was economically diverse. All the students were black but they weren’t all poor. Now schools are segregated by both race and class, concentrating the attendant problems of poverty.

Counts-Scoggins’s story goes full circle. Ironically, as of last year, she was working to help desegregate Charlotte-Mecklenburg schools, but whether or not black students will ever be fully accepted is a story yet to be told.

How to Remain Consistent in Business So You Can Earn More