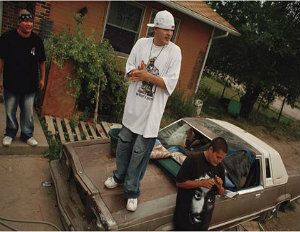 Native Americans live in some of the most extreme cases of rural poverty in the world and in recent years have encountered many of the same issues plaguing some of the country’s largest urban centers. A prime example of such isÂ the Badlands of South Dakota, which is home to the Pine Ridge Reservation and the Oglala Lakota tribe.

Pine Ridge, once the home of chief Crazy Horse as well as the 1890 massacre atÂ Wounded Knee, is experiencing poverty on levels seen only in third-world nations.

According to theÂ FBI, Native American gang membership has sharply risen in the last decade, with many notorious street gangs are making their presence felt on reservations across the country. Some of these gangs originated in the prison system.

The most known native gangs — Native Mob and Native Pride — are prevalent on reservations in North Dakota, Minnesota, South Dakota, and Wisconsin. Other native gangs have created their own versions of well known black, white, and Latino gangs such as the Bloods, Crips, NorteÃ±os, SureÃ±os, and Juggalos.