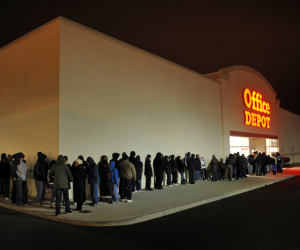 Black Friday, the day after Thanksgiving, is the official launch of the holiday shopping season and the busiest shopping day of the year. Shoppers line up in hopes of getting limited-time, price-chopping ‘‘doorbuster” sales. A bumper crop industry has emerged of businesses that cater to not only these shoppers, but the workers serving these customers.

“Most retailers, as you know, are working in overdrive on Thanksgiving weekend, with employees barely having time for a lunch breakâ€ says Jamie Schelf, director of catering for Atlanta-based Moe’s. “We know that a lot of [retailers] have budgets to cater during this time, and we thought this was perfect for Moe’s.â€

Normally providing catering services year-round, Moe’s was looking for a way to boost Thanksgiving-week sales and started targeting major retail outlets. By providing food for Black Friday store employees, Moe’s discovered a captive and often overlooked audience.Â  After printing marketing materials and providing education about the program, franchisees were then free to choose whether to participate.

Ilex Consumer Products Group is also attempting to capitalize on Black Friday shoppers. To help promote a new version of an over-the-counter stomach remedy, they’re hosting what’s being called a Black Friday Comfort Zone for shoppers in Manhattan. From 6 a.m. to midnight, there will be restrooms, a heated tent, phone-charging stations as well as Di-gel samples.

“While holiday shopping is supposed to be fun, it creates a lot of stress, and there’s no more stress than on Black Friday,â€ said Bernie Kropfelder, executive vice president for Ilex in Baltimore. “We thought this would be a nice respite.â€

Even businesses we traditionally don’t associate with Black Friday have found a way to capitalize on the “Super Bowlâ€ of shopping days.

Uptown Motors of California is located up the street to Mayfair Mall. They’re inviting customers to drop off their cars for work in the service department, and then providing shuttle service to the mall.

“There’s a lot of people going over [to the mall] for two, three, four hours, and if they need their car serviced they can kill two birds with one stone,” said Uptown owner Glenn Pentler. “We started doing this last year and it worked outâ€ Pentler said.

Nothing Personal, Just Business: Pros and Cons of Working with Friends

Nintendo Aims for Comeback With Wii U