Black Founders Ring In The Year With Hack Day 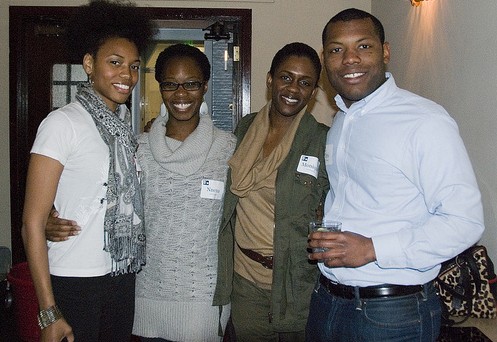 For many years, the word hacker brought to mind the 1980s movie War Games, where the central character, played by Matthew Broderick, nearly starts a nuclear war when he cavalierlyÂ  “hacksâ€ into a super computer that controls the governments’ entire arsenal of war heads.

Nowadays the average hacker doesn’t have devious intentions and they aren’t always held in contempt by the general public. In fact, they are held in high esteem, because they are the software engineers, computer programmers, and app makers that create the gadgets, operating systems, and mobile phone features, which have made our lives more convenient, efficient, and enjoyable.

Sponsored by Black Founders, an organization dedicated to making black startups a common occurrence, Hack Day, held Saturday, January 21, was a rare opportunity for black developers to meet each other, have technical discussions about tools, share coding advice, and talk about their projects.

“We limited the participants mainly because we wanted developers to network with each other intimately,â€ says Hadiyah Mujhid, the Black Founder co-founder in charge of outreach and educational programs. Mujhid is also in the process of launching Picture.ly Labs, a web company focused on image semantics.

Participants ranged from video game creators to iPhone and Android app developers–many of whom were racing to meet deadlines to submit their apps/software for approval.
Hacking has changed the way the world executes business, advertising, and commerce.Â  While African Americans enjoy the fruit of this innovation at an unparalleled rate, too few hackers are black, which means the profits from these inventions aren’t being fully realized by the black community. The creators of Black Founders felt it was necessary to unite black entrepreneurs because the country’s most successful technology incubators, where startups find funding and receive education, have low to nonexistent black participation.

Since the creation of the organization in March 2011, Black Founders has hosted nearly 20 events that range from small gatherings of 15 or so black hackers to larger events about filing patents, crafting an elevator pitch and creating business plans, among other topics.

They have partnered with prominent organizations and speakers like 500 Startups and Vivek Wadhwa, who as CEO of Seer Technologies helped grow the nascent startup into a $118 million publicly traded company.Â  Their events have connected more than 200 black entrepreneurs to a larger network.

“BF is a great resource for black entrepreneurs. They do a great job of organizing and educating folks,” says Patrick Jackson, who moved to San Francisco from the East Coast to help put his startup, Imaginary Feet, on better footing. “They really helped me network in San Francisco. We made some great contacts of venture capitalists at the Black Founders pitch party event that we will follow up with if/when we decide to raise a series A round. ”

The organization’s goals are to foster business development and close the digital gap in the black community, connect and equip black entrepreneurs in the technical startup population, while also driving innovation in that sphere through diversity and inclusion. Their programs are based according to the stage of the startup and whether they are in the ideation, pre-launch, post-launch, and/or growth phase. They hope to also launch programs that fill the pipeline of innovation at the high school and college levels.

This year Black Founders is planning more events geared towards the developers, including a sponsored hackathon with prizes. Also in the works are angel investing training workshops for October to help black professionals and philanthropists become angel investors, as well as the Start It Challenge, which will launch the first week of February. The free 12 week challenge will piggyback on Stanford’s online Lean Launchpad course by coordinating other online discussions with advisors and mentors and offline group Meetup events in different cities. At the end of the program, Black Founders will host a worldwide demo day online giving anyone access to participate. So far, 50 startups have signed up, including one from London.

“We learned last year even though we do have a strong support group in the [San Francisco] area, there is a community outside of this area who wants to participate even if it is through online events. This is a way to include them,â€ says Muhjid. “We are using that [course] to supplement what we’ve put together. We will have online teleconferences where our mentors will come and speak to the group. This course falls in perfectly. It is a great supplement to what we’re doing.â€

Finally, Black Founders joined the San Francisco Citizens Initiative for Technology & Innovation (sf.citi) advisory board. sf.citi also is working with Code for America (CFA) to partner with the City of San Francisco on an accelerator for startups that focus on civic issues, funded by Google and the Kauffman Foundation.