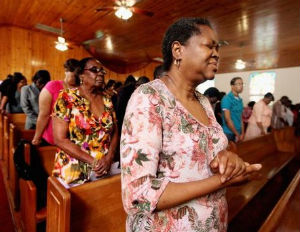 In the 2008 election, record voter turnout among African Americans was chalked up, in some measure, to “Souls To The Polls” initiatives, in which black churches would go en masse to vote early after Sunday services. When Ohio and Florida limited early voting before this election, many voting rights advocates argued that it was an attempt to add hurdles for black voters, who were more likely to vote early that other groups. Now there is only one weekend for early voting in Florida.

But black churches in the Sunshine State are stepping up their get-out-the-vote efforts, despite the new restrictions, according to the New York Times.

In the newly revised schedule, early voting began on Saturday and continues through next Saturday. The churches, then, have one Sunday instead of two to move their members to vote.

In Jacksonville alone, black churches enlisted 40 buses and vans to move people who did not have transportation to voting sites. They also ran car pools, offered breakfasts and lunch, and helped organize rallies with music and celebrity appearances.

In precincts in black areas like the Highlands section in the north quadrant, lines snaked out of doors and into parking lots and onto sidewalks. A 40-minute wait to vote was not uncommon. On Saturday, before the supervisor of elections opened the main polling site of Duval County at 7 a.m., a line of almost 100 voters, all black, had already formed. Within a half-hour, the line had doubled in length.

“I think the going sentiment was that Obama wouldn’t get the same rally cry this year as last time, but Florida woke up a sleeping giant that’s showing its defiance,â€ Mr. Diamond said. “I hate to say it, but Republicans probably would have done better if they had not tampered with early voting.â€

Read the whole story at the New York Times