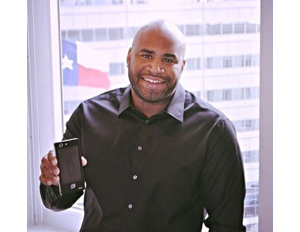 Darius Allen is the founder and CEO of Siam Smartphone and has an ambitious goal. Allen, a serial entrepreneur, is bringing the first dual-screen smartphone to the North American mobile market.

[Related: East Coast vs. West Coast: It Matters When Pitching Your Business to Investors]

Allen’s phone, instead, puts the second screen on the back of the device. It’s a similar design to the YotaPhone, which also has front and back screens. However, the YotaPhone did not find much success in the U.S. market and is targeted mostly to Europe, Asia, and the Middle East.

The Siam 7X phone features an E-Ink display screen on the back panel in addition to the 4.7-inch HD display on the front.

The back screen is multifunctional. It can serve as an e-reader in the same way as a Kindle, but it also can be customized with wallpapers; and supports widgets, notifications, and social feeds.

The front display is a 5-inch touchscreen. The Siam 7X has two SIM card slots for two phone numbers on the same phone (personal and business) and one of the SIM slots can also be used to expand memory with an SD card. The phone also employs an innovative security-unlocking program thatÂ uses a unique ear configuration to unlock, as opposed to entering numbers or swiping.

Additionally, it has an infrared eye that can control most Internet-connected devices such as TVs, stereos, air conditioners and more. It can also be used as a remote control. The Siam phone is a GSM carrier phone which means only AT&T and T-Mobile service can be used.

One of six siblings, Allen is a graduate of the University of Auburn School of Business, where he also participated in NCAA Division I football and graduated with a degree in information systems management.

Allen is also one of the few tech entrepreneurs of color to launch a startup offering tech hardware. There are many barriers for developing hardware, including manufacturing and testing costs. Currently, Allen’s phones are manufactured in Shenzhen, a well-known contract manufacturing center in China.

The Siam 7X is currently shippingÂ for $449 and is available in black or white. It comes with a lifetime warranty and accidental coverage.

Accounting Mistakes Entrepreneurs Must Avoid To Succeed, Are You Guilty of the Top 5?

‘Unfiltered’ Documentary about Rihanna in the Works