How Black America Can Thrive Under a Trump Presidency 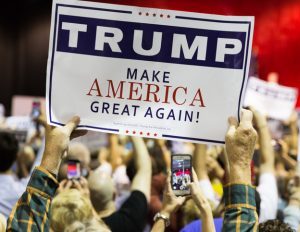 As the electoral counts rolled in, many minorities sat in disbelief as Donald J. Trump was determined to be the President—elect of the United States of America. However, after a year when so many unarmed, Black men were shot to death with zero repercussions or remorse–some didn’t find it so surprising.

Many bemoaned the idea of life under a Trump Administration given his incendiary rhetoric, which was given further fuel by the support of white nationalists and the “Alt-Rightâ€ —perceived by many to be Nazi’s. This perception was given credence due to them being seen giving Nazi salutes while yelling ” Hail Trump!â€ To be fair, Mr. Trump has said that he didn’t condone their actions. Yet, at a number of these events, the expulsion of minorities was cheered by attendees, who often attempted to intimidate protesters, with that sometimes resulting in physical assaults.

After hearing of a key nomination to Attorney General of Senator Jeff Sessions–who has a history negative racial comments–alarms were sounded for black Americans. Concern over setbacks under President-elect Trump continued to mount, over an administration that seemingly has zero consideration for this demographic. Many black Americans and minorities have espoused that this seems to be one of the key drivers for his election.

When considering these factors, it isn’t hard to understand why so many Black Americans and other minorities feel threatened by a Trump Administration.

The artist, Q-Tip of A Tribe Called Quest, thoughtfully reflected on Mr. Trump in a Bloomberg political television show after a well received and critically acclaimed single release entitled “We The Peopleâ€ —which recaptures the group’s 80’s positivity and consciousness while embodying the ethos most minorities felt upon hearing of the election results. The song questions our participation in his vision and the bleak expectations of what is likely to be in store for us. As Q-Tip stated in his interview ” I didn’t vote for Mr. Trump…but he is my President now..â€ an ethos echoed by Dave Chappelle on Saturday Night Live that was accompanied by an entreat on behalf of the historically disenfranchised along with a demand–directly to Donald J. Trump to include Black people along with other minorities in his vision for America. A chance Mr.Trump openly asked for during his campaign.

On that basis, I would urge Black America and other minorities to take a similar tract, think beyond their emotions and consider in a calculated fashion what opportunities lie ahead. I have given some thought in regards to specific targets for consideration.

Trump has a strong appeal to entrepreneurs and has stated a deep commitment to foster job creation. Economically speaking, small business is the greatest driver of jobs. Large companies such as JP Morgan or General Electric have large numbers of jobs–they don’t create lots of new ones in scale. New job creation is primarily driven by entrepreneurs who create small firms, which in turn serve large companies. Trump will nurture a fertile environment for entrepreneurs and has stated that he wants to be the largest job creator in the history of our country. Traditional Republican ethos supports entrepreneurialism and business, this will be strongly supported by a Republican-led Senate and Congress–making it one of the most favorable times in recent history to start a business. Ride this wave and target service areas for larger firms.

The 114th Congress proposed a $30 billion small business loan package to deliver capital to everyday Americans that are aspiring entrepreneurs and facilitate the creation of small businesses. Since the financial crisis, monetary policy has benefited financial services and large firms with strong credit ratings, through quantitative easing. These measures have not helped small firms or created jobs, but instead, it has kept money in large institutions and banks.

Now is the time for fiscal measures, and the banks will be pushed to lend. Large private equity firms, such as Blackstone and the Carlyle Group, have created credit funds to target small businesses in anticipation of this trend. Here’s a guide to the original proposal.

Trump has stated a specific focus on infrastructure, being a successful real estate developer–he is intimately aware of development and it’s surrounding fields: carpentry, masonry electrical wiring, and plumbing. A main focus of the Trump Administration will be to upgrade infrastructure, that will be driven at the Federal level, but it will flow down to the State and Municipal levels–this will create lots of opportunities. Many States and Municipalities have minority participation percentages that were set at those government levels–this isn’t determined at the Federal level. Registering under minority business lists for both cities and states will allow minority firms to participate in the allocated business. These opportunities will range from wiring for technology to bridge infrastructure repair and construction redevelopment.

Trump’s first love has always been real estate, although most in urban Black America do not see Dr. Ben Carson as a strong minority or pro-black for that matter–he is arguablyÂ a highly, intelligent and capable person. Dr. Carson had tremendous success as a surgeon and achieved global recognition. Expect him to bring the same focus and commitment to excellence in urban development as he attempts to make his mark outside of medicine. Real estate in urban areas is often cheap, entrepreneurial activity in these areas will be heavily encouraged and supported by the Trump Administration, with financing accommodations by banks. This will also create opportunities for skilled tradesmen such as carpenters, electricians, and plumbers for work and the creation of their own firms.

A noteworthy point is that Odebayo Ogunlesi was named an advisor to the Trump Administration. Mr. Ogunlesi is an international investment banker of note who formerly ran Credit Suisse ‘s Global Investment Banking unit in its heyday. Unknown to most, Mr. Ogunlesi is the current owner of Gatwick Airport in London. He is a both skilled and forceful person of color–clearly no one’s lackey. The Nigerian, born Wall Street trained attorney is a combination of independent and capable. His presence on the advisory board means that there are tangible opportunities for people of color.

In closing, Donald J. Trump might not have been the choice of Black America and other minorities, but that doesn’t mean that we cannot thrive in the environment created by his administration. Careful thinking and focus on areas that will benefit from his policies, can create successful businesses in our communities. Baldwin has a Diploma in Financial Strategy from the University of Oxford’s Said School of Business and completed the Advanced Management Program (AMP) at Cambridge University, he graduated from Antioch University with a B.A. Baldwin was the second African American member of the Chicago Stock Exchange.